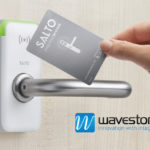 A technology partnership formed between SALTO and Wavestore is enabling operators to instantly visually verify the identity of anyone attempting to gain access to a site or sensitive areas of a building.

“Interaction between access control and video surveillance systems has been possible for some time,” said Enrico Bizzaro, head of integrations for Wavestore. “However, with the Wavestore VMS able to quickly process large amounts of metadata, we’re now able to provide operators with a powerful tool to instantly display detailed information on who, when and where staff and visitors have entered or moved around a building.”

The integration between SALTO and Wavestore enables operators to visually verify in real-time all access control activity via the Wavestore Graphical User Interface (GUI).

A virtual spot monitor can be set up to display video captured by cameras associated with the door where an event is occurring. Colour-coded text is generated to enable operators to more quickly identify the type of event (eg green for access granted and red when access is denied), while the operator also has instant access to data such as the name, job title, ID number and image of the individual attempting to gain access.

Operators are alerted if a door is forced open. They’re able to immediately see who’s trying to break in and where the door is located on a map of the building

Wavestore’s rules engine enables metadata pushed by the SALTO server to be configured to generate various actions when someone presents their access token to the reader, such as trigger a PTZ camera pre-set or a recorded audio message on an integrated speaker.

There’s a long list of ways in which the recorded metadata can be filtered to allow operators to rapidly search for specific events. These include by time, door and camera location, first name, surname and ID number of a person or any other database credentials.

The combined SALTO and Wavestore solution offers security personnel a range of other benefits, including ‘one screen, total control’. Just one operator screen is needed to seamlessly manage events captured by analogue, HD or 360° cameras and the access control system, as well as other integrated third party technologies. There’s also instant retrieval and transmission of video clips of events using Wavestore’s ‘Just 3 Clicks’ evidential export function.

“Integration is one of our top customer requests and so this project with Wavestore gives end users a powerful and easy-to-use platform that delivers a host of security and access control benefits,” explained Ramesh Gurdev, managing director of SALTO Systems UK. “With the combination of the two technologies, end users now have a comprehensive security solution at their fingertips.”

Globally, SALTO and Wavestore are now routinely being specified for the same high security and mission-critical projects,” said Enrico Bizzaro, head of integrations for Wavestore. “As a result of this integration, Wavestore and SALTO are now able to provide mutual customers with a highly effective, efficient and easy-to-deploy solution for video, data and access control management. This technology partnership is an excellent example of how Wavestore is working closely with other manufacturers who are experts in their respective fields to help our distribution and system integrator partners to compete for new projects by offering end user clients a Best of Breed and seamless integrated solution.”