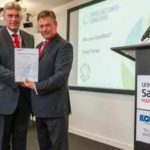 The Surveillance Camera Commissioner’s third party certification scheme enables organisations to clearly demonstrate that they comply with the Surveillance Camera Code of Practice. For relevant authorities (such as local authorities and police forces) this is particularly important, as they must show due regard to the Code. For other organisations, compliance with the Code is voluntary.

Salford University has recently achieved Step 2 certification. It’s not an organisation that’s legally required to comply with the Code, so why apply? Trevor Jones, head of security at Salford University, said: “The university believes that following the Code is nationally recognised as Best Practice for CCTV operations. Applying for and attaining the Commissioner’s certificate, and being able to use the certification mark, demonstrates to our students, staff and visitors that we operate our CCTV to the best standards possible.”

For many youngsters, going to university or college is probably their first experience of living away from home. Many probably don’t give much thought to their safety or who’s looking after them. Do they securely lock their laptops, smart phones and tablets away? Are their doors and windows secure, is the campus safe and who can they call in an emergency? For parents, their children’s safety is almost certainly at the forefront of their minds.

Jones added: “Achieving certification against the Code shows to potential students and their families that the university takes their safety and security extremely seriously. Being recognised by the Surveillance Camera Commissioner as an organisation that reaches the highest standards is a powerful statement.”

Certification is simple, accessible and affordable and there are three security industry certification bodies currently qualified to audit against the Code of Practice – the National Security Inspectorate, the Security Systems and Alarms Inspection Board and IQ Verify.

“We already had BS 7958 [the British Standard for Control Rooms) in place as well as all the relevant governance and documentation,” stated Jones, “so the process was very easy for us, though I imagine if you don’t have BS 7958 the process will still be relatively easy. If you currently run a good system and Control Room then you should meet all of the necessary requirements.”

To achieve the full certification mark, Salford University invited an auditor from one of the certification bodies into its CCTV Control Room to audit the surveillance system, cameras and procedures, working with a checklist against the 12 guiding principles in the Code.

The audit took place over the course of a day. During the visit, Salford University was required to provide various items of documentation such as privacy impact assessments, procedural manuals and information sharing agreements for the auditors to inspect.

Salford University passed with flying colours and was awarded full certification. The University is now also able to proudly display the Commissioner’s certification mark on its website and other publicity materials.

Trevor Jones concluded: “I would certainly recommend the certification scheme to other universities. In fact, I think it should be mandatory. It’s excellent value for money, too, simply because of the huge reputational value it offers.”