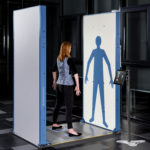 Rohde & Schwarz has recently been demonstrating its QPS201 security scanners, designed to deliver fast and efficient scanning while improving the customer experience in airports. In addition, the company’s ARDRONIS drone identification system detects and provides critical early warnings for drone activity, automatically classifying the type of signal, direction of the drone and pilot and the ability to disrupt the radio signal.

The QPS201 security scanner can detect potentially dangerous items carried on the body or in clothing, including metal, ceramics, plastics and liquids. The design of the scanner ensures a short scan time with easy-to-hold body position and an open architecture that provides an unobtrusive environment for the individual, while also allowing security staff an unobstructed view. This also creates an accessible escape route in the event of an emergency, in addition to easy wheelchair access.

Using state-of-the-art millimeter-wave security, potentially dangerous items that have been located by the scan are displayed on a touchscreen and marked using a symbolic body graphic to protect the privacy of the individual.

Consumer drones can present a potential danger in many situations including air traffic, political gatherings and events. Early warning is the key to countering such threats and the ARDRONIS can detect radio control (RC) activity even before a drone takes off. 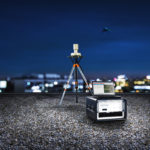 This automatic RC drone monitoring system secures a predefined airspace by specialising in detecting, classifying, direction finding, recording and disruption of the RC link to a drone. Using highly sensitive antennas and monitoring receivers, the ARDRONIS detects activity and employs an extensive library of profiles to classify the type of signal.

The direction in which the drone is being remotely controlled is determined, allowing disruption of the RC link to prevent the drone from reaching its target. Displaying concise information with continuous updates on a map, a predefined list of contacts can be immediately notified of the potential threat, providing a reliable early warning detection within the coverage area.

Gary Walker, UK and Ireland Government account manager at Rohde & Schwarz, explained to Risk Xtra: “Security for events and buildings such as Government offices, concerts, football games and airports is becoming increasingly challenging. We’re addressing some of the latest challenges by providing fast, safe and user-friendly technologies that ensure safety and security, as well as early warning of potential threats including drones. The QPS201 full body security scanner is efficient and unobtrusive, while our drone detection technology could potentially prevent major incidents from occurring.”