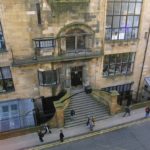 An assessor is to complete a thorough and detailed compliance report at the Glasgow School of Art following two devastating fires in the past four years. The most recent fire was in June this year, of course, with the previous blaze gutting the building in 2014. The majority of the original structure built from 1897 to 1909 has been destroyed.

More than 120 firefighters and 20 appliances were called to tackle the latest blaze, which began at around 11.15 pm on the night of Friday 15 June and rapidly spread to a neighbouring music venue on Glasgow’s famed Sauchiehall Street, namely the O2 ABC.

The independent fire safety expert will now risk assess more than a dozen Glasgow School of Art buildings. These include the Barnes Building, the JD Kelly Building and the Haldane Building. All the buildings set to be assessed were constructed in the 19th Century.

The tendering document states: “The fire risk assessment will help to identify risks that can be removed or reduced and to decide the nature and extent of the general fire precautions that need to be taken to protect people against the fire risks that remain.”

The Glasgow School of Art recently announced that the burned-out shell of the Mackintosh Building has now been stabilised and local business owners will be permitted to return to their premises.

Muriel Gray, chair of the Glasgow School of Art’s governors, said that the Mackintosh Building would be rebuilt to the original designs in a £100 million project. The building was originally designed by art nouveau architect Charles Rennie Mackintosh, whose designs extended to the smallest detail, including the furniture, lamps and glass inlays.

In a statement, Gray observed: “We’re truly sorry for the impact the fire has had. There was an extremely rigorous analysis after the fire that occurred back in 2014 and it’s important that we conduct a similarly rigorous analysis once again. As part of that process, we’re commissioning external fire risk assessments.”

The 2014 fire started when flammable gases from a foam canister used within a student project were ignited by accident. A report subsequently compiled by the Scottish Fire and Rescue Service concluded that old ventilation ducts helped the blaze to spread into neighbouring studios and upwards through the building.

Restoration work on site had been in progress since that initial fire, beginning with debris removal followed by a salvaging procedure carried out by specialist forensic architects. What then followed was the drying out of the building in order to guard against future difficulties with rot.

The painstaking restoration project had been due for completion by the end of this year, with undergraduate students scheduled to return to their studies within the building in 2019.