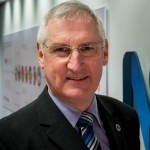 The National Security Inspectorate (NSI) has announced the appointment of Richard Jenkins as its new permanent CEO with immediate effect. Jenkins has been in the interim role since March 2014 following the departure of Jeff Little OBE.

When meeting in December, members of the NSI’s Board of Directors were unanimous in ratifying the decision on this key position.

Chris Hanks, chairman of the NSI, explained: “I’m delighted that Richard has accepted the role of chief executive on a permanent basis. He has brought fresh thinking to the NSI and a steady hand to the helm. The NSI brand is revered throughout the industry and beyond and now finds itself well placed to tackle the challenges of the future.”

A specialist certification body in the fire, electronic security and security guarding services sectors, the NSI employs over 30 full-time multi-disciplined auditors providing national coverage across the UK and Eire.

Speaking about his appointment as permanent CEO, Richard Jenkins said: “The NSI is a tremendous force for good in helping raise standards in the security and fire sectors and is committed to continuing its work. In particular, the quality of the team at the NSI is second to none in the industry and it’s an honour to be asked to lead all team members in their next phase of development.”

Jenkins continued: “End users who contract a service provider certificated by the NSI for managing the security of life and property can have the highest level of assurance that they’re in safe hands. The quality, experience and progressiveness of our national network of auditors and head office support team delivers the NSI’s unique brand of service underpinned by a determination for continual improvement. This is an ethos championed by the NSI Gold approval.”

Prior to joining the NSI last year, Jenkins’ most recent role was with IKEA where he developed and implemented the company’s auto-enrolment pension scheme strategy and led the work to launch its UK Internet and home shopping delivery service in addition to a dedicated continuous improvement programme.