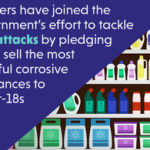 Some of the country’s largest retailers and independent business leaders have pledged not to sell the most harmful corrosive substances to those under 18 years of age. This move is part of a series of voluntary commitments proposed by the Government, which has now published the details of those voluntary commitments, as well as a list of retailers who’ve already signed on the dotted line.

Waitrose, B&Q, Morrisons, Wickes, the Co-op, Screwfix and Tesco are among the major brands to sign the voluntary commitments on the responsible sale of corrosive substances. This month, the British Independent Retailers Association will be encouraging all of its members to sign up.

The news comes as the University of Leicester launches a major research project, commissioned by the Home Office, into the motivations of offenders who carry and use acid in violent attacks.

Victoria Atkins, the Minister for Crime, Safeguarding and Vulnerability, said: “Acid attacks have a devastating impact on their victims, leaving both emotional and physical scars. I’m pleased that so many of the UK’s major retailers are joining our fight to combat this scourge and signalling that they’re committed to selling acids responsibly. This is the next step of our Acid Attacks Action Plan that has already seen us consult on new laws to restrict young people’s access to acids. It’s also vital that we gain an insight into the motivations and behaviours of those who carry out these unspeakable attacks, which is why we’ve commissioned a major piece of research that will help us to understand more about this form of criminality.”

The voluntary commitments will see retailers:

*agree not to sell products to those under 18 years of age that contain potentially harmful levels of acid or corrosive substances, including applying Challenge 21/25 policies when asking for age identification, staff being supported by till alerts and supervision and inclusion of these products in age-restricted sales training

Immediate action on a voluntary basis

The voluntary agreement has been introduced now to ensure immediate action is taken by retailers on a voluntary basis in advance of new legislation including the ban on sales to those under 18 years of age being brought before Parliament and put into effect.

Assistant Chief Constable Rachel Kearton, the National Police Chiefs’ Council’s lead on corrosive attacks, stated: “The use of acid to commit acts of violence is particularly abhorrent. The perpetrators aim to leave their victims with horrific and life-changing injuries. Tackling the scourge of acid attacks requires a co-ordinated approach across a number of different organisations and sectors. I commend all those major retailers and independent stores which are now taking steps to help prevent acid attacks from taking place.”

Kearton added: “The majority of us find it hard to believe that anyone would choose to throw acid over another person. This new research project will enable us to improve our understanding of why offenders are motivated to use acid as a weapon and assist us in stopping attacks in the future.”

The academic research being undertaken at the University of Leicester will see criminologists examine the motivations and decision-making processes behind carrying and using acid as a weapon and the characteristics of offenders and their relationships with their victims, as well as how the substances are purchased and transported.

The steps announced form part of the aforementioned Acid Attacks Action Plan announced by the Home Secretary Amber Rudd last July. The Home Office also recently concluded its consultation on proposals to ban the sale of products containing the most harmful corrosive substances to under-18s, make it an offence to possess a corrosive substance in a public place without good reason and introduce minimum custodial sentences for those repeatedly caught carrying acid without good reason for doing so.

Vin Vara, national president of the British Independent Retailers Association, concluded: “The British Independent Retailers Association represents thousands of hardware stores across Britain. As specialist retailers, we want to make sure that our customers receive the expert support and advice they need in order to ensure the responsible sale of any of our products. We take our duty to supply and sell these substances very seriously, and we’re happy to back the Government’s commitment to address and limit their sale.”