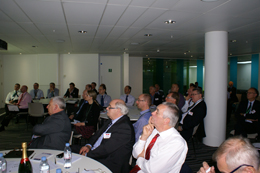 Ray Kay, head of Vodafone M2M UK, kicked off the discussions by outlining Vodafone’s vision that 50% of organisations will have adopted M2M by 2015. Kay also outlined the substantial investments being made in 2G, 3G and 4G networks in order to ensure perfect voice calls, competitive 3G coverage and 98% indoor 4G coverage by the end of next year.

National Security Inspectorate (NSI) CEO Richard Jenkins then described his organisation’s focus on raising standards in the industry and how becoming an NSI approved company directly impacts on this. The NSI believes that robust services, tougher regulation and police response measures are all key contributing factors.

CSL DualCom’s group managing director Simon Banks also touched on standards and reviewed a specific example of how CSL DualCom takes responsibility for the entire journey of an alarm signal.

Future proofing and carbon footprint reduction via Remote Servicing and Diagnostics (RSD) was touched upon, a message mirrored by Mark Emery from Swift Fire & Security. Emery explained how the additional benefit of reduced engineering costs offered by RSD is a great asset to the company’s engineering armoury.

Ed Barge of EMCS presented an overall picture of the current trends from the Alarm Receiving Centre perspective, noting a particular increase in upgrades from bells-only or Digicom systems to monitored single path solutions very much in keeping with the day’s theme of raising standards.

Geoff Wright of AIG then took the audience through a Case Study focused on a £25 million loss at a large warehouse. In the example given, insufficient management programmes caused delays in calling the fire brigade despite the correct installation of fire detection, sprinkler and security systems.

Reducing risks to the public and property

Pat Allen” chairman of the Fire and Security Association” chose to list measures that can be taken to reduce unwanted alarms. Allen advised that monitored fire systems allow for early detection which reduces risk to the public and property (as well as fire-fighters themselves).

ACPO’s Ken Meanwell highlighted the tremendous reduction in false intruder alarms in recent times which is largely thanks to advances in alarm signalling coupled with more stringent penalties for repeat false alarms. This greater efficiency has also allowed for a reduction in police response times.

Mike Jay” insurance expert and convenor of the RISCAuthority Security Group at the Fire Protection Association” concurred with these findings as his organisation has witnessed a reduction in claims and criminality due to the success of security companies and the police service in increasing the risks involved for criminals.

The BSIA’s technical director Alex Carmichael considered the discrepancies that can arise between test houses for European third party specifications and provided an update on both European and international standards.