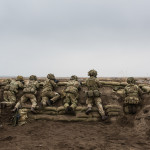 A new report published by PwC on perceptions around the role of the Armed Forces finds that members of the public are increasingly concerned by ‘modern threats’. More than ten times as many people (65%) believe that terrorist and non-state groups and cyber attacks pose the biggest threats to the UK in comparison to those who feel it is war with another state (6%) that presents the largest cause for concern.

The report, entitled: ‘Forces for Change: The Public’s View of Defence’, is based on a survey of 2,000 people* and also finds that a majority (53%) would like to see the UK’s military strength increase in the next 20 years. 16% say they would like it to decrease and 21% would like it to stay the same.

58% of respondents indicate a preference for an Armed Forces with a large military budget, well trained medium size forces with naval and air capacity and modern technology as well as a capability for global deployment.

Survey respondents perceive the Armed Forces defending the UK from threats abroad, intervening in situations overseas where UK security or citizens are directly threatened and managing disasters at home and abroad as being very important roles. However, the research also finds evidence that the public perceives the Armed Forces to be under-equipped, in turn raising the issue of whether there will be the capability and capacity to deliver such a broad range of roles.

Roland Sonnenberg, partner at PwC, said: “The public takes the view that the military’s strength should be increased and that the Armed Forces’ roles at home and abroad are very important. This raises questions about how the actual readiness of the Armed Forces squares with how ready the public wants them to be. Are the Armed Forces capable of supporting both military and non-military roles in the future?”

Gap between reality and perception

The report also highlights the gap between the reality and perception of the contribution that the Armed Forces make to the wider economy. When asked whether maintaining the Armed Forces has a positive or negative impact on the UK’s economy, 16% of respondents answered ‘Don’t know’, while 29% think the military has no net effect on the economy.

Of those who did express an opinion one way or another, the results are broadly favourable for the Armed Forces: 37% think that they strengthen the UK economy with less than half that number (17%) believing they weaken it.

Sonnenberg added: “While public support for the Armed Forces remains very high overall, this does not appear to be driven by their perceived economic contribution. While more rigorous official data collection would help, more could be done across the defence sector to analyse and communicate the positive socio-economic benefits of their activity.”

Continuing that theme, Sonnenberg stated: “Public awareness could be increased around the contribution defence plays in supporting the economy, training and skilling younger people and creating jobs directly and indirectly in both the British defence supply chain and across the wider economy. Using social media and other digital channels would be effective ways of reaching society generally and particularly the 18-34 year old demographic.”

According to Sonnenberg, each of the Armed Forces are a multi-billion enterprise in their own right. There’s a need to help the public understand the clear economic value that they generate.

“The Armed Forces should consider how best to communicate with and engage the public to improve understanding, explaining the value and benefits they bring around the breadth of their roles including their peacekeeping and disaster management responsibilities – areas that the public recognise as being very important.”

Reported trust levels vary by age: 77% of those over 55 trust the Armed Forces while among 18-34 year olds the figure is 58%. However, this finding is not just related to the military. Younger people report lower levels of trust in the majority of the institutions mentioned.

There are several reasons why this might be the case: the effect of a negative public view towards the campaigns in Iraq and Afghanistan, a natural scepticism towards traditional institutions among the ‘Net Generation’ and lower recruitment meaning fewer young people are either in the Armed Forces or know people who are serving than previously.

In conclusion, Roland Sonnenberg outlined: “These findings have interesting implications in terms of who the public listens to in the debate on future defence needs. The generational differences we have identified may have repercussions for talent management. If 18-34 year olds do not value the Armed Forces or understand their purpose to the same degree as older demographics, this may impact on the ability of the defence sector to attract and retain top talent. The Armed Forces need to actively engage with young people as a broader peer group.”

*Opinium Research carried out an online survey of 2,007 UK adults aged 18+ from 16-17 of April 2015. Results have been weighted to be nationally representative. The results were analysed by age, gender, region and socio-economic group to gain a deeper understanding of how views towards the Armed Forces vary between different subsets of the population