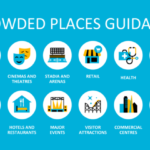 New and updated guidance intended to offer protective security advice to those responsible for managing the security of crowded places has been issued by the National Counter-Terrorism Security Office (NaCTSO). This new guidance is primarily aimed at those with a direct responsibility for security at crowded places and those who own or run businesses, organisations, amenities or utilities.

Crowded Places Guidance for the UK has been written by NaCTSO with the support of the Centre for the Protection of National Infrastructure and over 100 subject matter and academic experts. It covers the key areas of protective security including physical, personnel, personal and cyber, affording guidance on how different sectors can act to help make their business, institutions or organisations safer.

Its purpose is to support those charged with security at crowded places in mitigating the threat and helping to make the UK less vulnerable to an attack.

The guidance is interactive and designed to assist professionals operating in crowded place sectors to assess the risk and build a security plan to help mitigate that risk and recover more quickly should there be a terrorist attack.

As the terrorist threat is constantly evolving, the guidance has been designed to be a ‘living document’ taking the best advice from some of the UK’s leading experts and organisations. There are many links within the guidance directing specialists to websites providing additional support for planning.

The foundation for the ability to manage during a crisis lies in the preparations made. It’s important to recognise the risks, develop security plans, train staff, carry out rehearsal exercises and fully understand both roles and responsibilities. Leadership will come from all levels within an organisation during an incident, but absolutely must emanate from the top in order to actively change the security culture.

Attacks can occur anywhere… and without warning

Deputy Assistant Commissioner Lucy D’Orsi said: “Terrorist attacks are rare in the UK, but recent events have shown that an attack could happen anywhere and without warning. Those locations either public or private where large groups of people gather for entertainment, business, transportation, sporting events or social occasions have always been preferential targets for terrorists. Terrorism has evolved in recent times, with many conflicts overseas influencing terrorist acts here in the UK. Social media in particular is being manipulated to incite, inspire and enable groups and individuals to target these crowded places.”

D’Orsi continued: “The threat level posed to the UK by international terrorism is currently set at ‘Severe’, which means that an attack is highly likely. Such an attack can come in many forms. It can include interference with vital information or communication systems, causing disruption and economic damage. Against this background there’s a need to make our crowded places as accessible as possible and minimise the threat. There’s a balance to be achieved whereby we must all take responsibility for security in order to mitigate the threat and the impact of terrorism.”

Every location is different, and D’Orsi strongly urges security professionals to review security and risk management procedures using the information in this guidance for reassurance.

Guidance within the NaCTSO booklet is intended to not only make the UK more resilient to a terrorist attack, but also to support the ongoing fight against other crimes.

Rudd stated: “This was a useful opportunity to talk about the efforts Facebook is making to tackle terrorist and extremist propaganda online. I welcome its commitment to take serious action and to play a leading role in the industry forum announced in March after my last meeting with Internet companies.”

The Home Secretary continued: “This is a problem that transcends borders. Indeed, a truly global effort is needed to make a real difference. The Prime Minister has urged fellow EU leaders to help rid the Internet of terrorist-related material in all our languages, and has gained support for the forum at the G7.”

Karen Bradley observed: “Social media companies bring great benefits to the UK, but we need to continue to work together to ensure members of the public are safe online. Social media companies have a responsibility to protect people who use their technology and tackle those who employ it to promote terrorism, illegal activities or hate. This meeting was a good opportunity to hear what progress Facebook is making in this area, and to discuss what more can be done to keep everyone safe from today’s myriad online threats. I look forward to continuing to work with Facebook and other companies to ensure that, together, we’re tackling the online threat.”