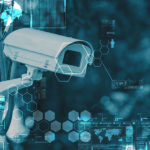 Despite ongoing concerns about state data sharing, new research has revealed that senior decision-makers prioritise media reputation (71%) and face-to-face relationships (72%) over where a vendor is based (58%) when evaluating a potential security partner.

The in-depth research, which was commissioned by Say Communications and published under the banner ‘The State of Trust in Security Companies Barometer’, explores senior decision-makers’ attitudes towards choosing physical and cyber security vendors and what motivates them to select a partner.

The research of 313 senior decision-makers in companies with over 500 employees was compiled and analysed by Infotec Marketing during November and December 2018 following a specification provided and approved by Say Communications. The fieldwork was carried out between 28 November and 10 December, with interviews conducted online among a pre-defined group of business executives.

Product features were a key factor, with quality, cost and flexibility identified as the three influences which had the most significant impact on purchasing decisions. Interestingly, cost was of less significance the more senior the executive, with the C-Suite placing less priority on this factor than the other management respondents.

In general, C-Suite executives were more likely to focus on vendor relationships and their client base than their less senior counterparts.

The research shows that, to gain senior decision-makers’ attentions, vendors need a strong online and offline profile (see Bar Chart 1). For example, overall, analyst reports (49%), meetings at trade shows (41%) and trade media coverage (37%) were valued most highly as the most trusted sources of information for evaluating a new vendor. However, if this were for C-Suite decision-makers only, social media (31% versus 24% overall), a vendor’s website (44% versus 36% overall) and online communities (41% versus 28% overall) are considered more useful. 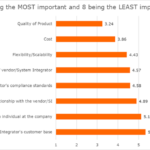 Louise Stewart-Muir, director of technology at Say Communications,  commented: “In today’s competitive security landscape, it can be hard for vendors to achieve cut-through. While we’re all aware of the sales funnel, this research demonstrates that vendors need to be aware of each stage of it and take steps to put themselves in front of prospects at every opportunity, using the marketing mix to help them. However, the most surprising takeaway from this research is that a vendor’s country of origin isn’t a key influence in terms of whether or not an organisation will work with a vendor. Considering the PR barrage companies such as Huawei and Kaspersky Lab are coming under just now, we fully expect this issue to become more prominent over the coming months and years. This response shows a shockingly laissez-faire approach towards security. At a time when data has never been more valuable, it equates to a worrying lack of due diligence.”

When senior decision-makers were asked to rank which sources of information they felt would give them the most accurate and unbiased information, Case Studies were seen as the most reliable source followed by relevant coverage in a channel and trade publication (see Bar Chart 2). 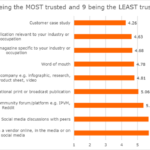 Interestingly, national coverage was not thought of highly, and only ranked above advertisements and discussion on social or online platforms.

Spokesperson titles were also an influencing factor, with C-Suite titles and technical experts rated as the most trustworthy sources of information. So, while the sales function may be key in securing the sale, it’s not to be relied upon when raising awareness initially.

“Overall, this mix of marketing activity should help vendors not only achieve visibility, but also authority.” asserted Stewart-Muir. “With the cyber security market predicted to be worth $248.26 billion by 2023, and the physical security market worth $119.4 billion by the same year, there’s ample opportunity for vendors if they know how to market themselves and their solutions. While quality and cost will, of course, come into play, in such a crowded market those who proactively roll-out and maintain an integrated PR and communications strategy will inevitably come out on top. It’s clear that vendors need to busy themselves with marketing and demonstrate their worth before it’s too late.”

*Access ‘The State of Trust in Security Companies Barometer’