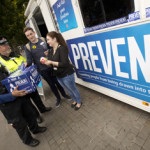 Preventing terrorism is a joint responsibility: that’s the view of the North West Counter-Terrorism Unit

The North West Counter-Terrorism Unit has launched a short film to highlight Prevent, part of the national Government’s strategy aiming to stop people becoming terrorists or supporting terrorism. The film portrays what preventing people from being drawn into terrorism means for a range of organisations and groups including police, health, education and community workers and highlights that preventing terrorism is a joint responsibility.

The film has formed part of Prevent Week, a national campaign designed to promote how the police, its partner law enforcement agencies and members of the public can play their part in keeping the UK safe from terrorism by being aware of signs of radicalisation and sharing their concerns.

Prevent is all about safeguarding people and there’s support available from a number of different organisations that can protect those who may be at risk of radicalisation.

Greater Manchester Police Prevent officers and city centre neighbourhood officers were located in central Manchester during Prevent Week to talk to local people about Prevent and what their role is to help protect individuals who may be drawn into terrorism.

The week aimed to encourage more people to talk about Prevent, and there was the opportunity for the public to post a question about Prevent.

Assistant Chief Constable Ian Wiggett, North West lead for counter-terrorism, explained: “We all must play a part in preventing terrorism and work together to safeguard vulnerable people from being drawn in and exploited. Our engagement activity throughout the week has helped raise awareness of the importance of Prevent among many different partners. We will continue to encourage people to talk about the issues around radicalisation and violent extremism and come forward with their concerns to help protect individuals, families and communities alike.”

Ann Christopher, named nurse for safeguarding adults at the Pennine Acute NHS Hospitals Trust, took part in the short film. “The NHS comes in to contact with very vulnerable people on a regular basis who may be at risk of being groomed, which could include exploitation by violent extremists and terrorists,” stated Christopher.

“Staff within the NHS receive training in Prevent to help identify people who may be at risk of radicalisation. We’re one of many avenues of support for people who are concerned about somebody, and we encourage people to come forward and have that conversation.”

*The Prevent film can be viewed on You Tube: https://youtu.be/Y06MKUo6snQ

**More information on Prevent may be found at: http://www.gmp.police.uk/prevent

***Prevent is part of the UK’s CONTEST counter-terrorism strategy. Further detail around CONTEST can be accessed here: https://www.gov.uk/government/publications/counter-terrorism-strategy-contest