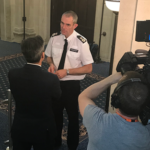 The police service has prepared for a range of scenarios in the event of the UK leaving the European Union without a deal, including planning for potential protest, crime and emergencies. The National Police Chiefs’ Council (NPCC) is leading on police planning at the national level and working with the Government, other public services and partners. A national unit has been established to gather and share intelligence from across policing with central Government.

Police forces are part of a multi-agency response to potential issues at the local level through local resilience forums, which are made up of representatives from the Emergency Services, local authorities, health services and the Environment Agency. Local resilience forums have been planning for the impact of potential delays at and around ports including traffic disruption and response to any shortages of commodities.

NPCC chair Martin Hewitt said: “Our planning considers what might happen and the worse case scenarios. We’re not predicting these outcomes, but we are preparing for them. As the public would expect, we will continue to gather intelligence, consider potential threats, risks and harms and have plans in place to respond proportionately. This planning involves looking at potentially unusual or unique challenges, but most of it is routine and we’ve tried and tested plans and approaches. There are strong views on Brexit and often loud and passionate debate. There’s a responsibility on us all to think carefully and be temperate in how we communicate such that we don’t inflame tensions.”

Chief constable Charlie Hall, the NPCC’s lead for operations, observed: “At the moment, we have no intelligence to suggest there will be rises in crime or disorder, but we are well prepared to respond to any issues that may arise. We expect to see more protests in the coming weeks, but we have no intelligence to suggest that protests will be anything other than peaceful as they have been to date. We will always seek to facilitate the right to peaceful protest, balancing the right to protest with disruption to local communities. We work with protest organisers to achieve this.”

Hall added: “The public can help us keep protests safe by being vigilant for anyone or anything that looks out of place or suspicious and reporting it to a member of staff, security officers or the police. Police officers are trained and equipped to maintain public order. The police service has established plans in place to surge officers within force or mobilise officers across the country if necessary.”

Police forces routinely share officers to ensure an appropriate police presence exists where there’s increased demand for it. As part of established plans to respond to any widespread disorder or emergencies, police forces are required to mobilise a certain number of officers within a set time period. Over 10,000 officers are trained and available to respond to national issues in extremis. These plans have been tested and exercised in recent months.

The National Police Co-ordination Centre manages this mobilisation. Mutual aid requests are made based on a strategic threat and risk assessment of incidents, with the length of mobilisation depending on the circumstances of the incident.

Chief constable Hall continued: “National and global events have the potential to trigger short-term rises in hate crime. We saw this with the significant spike following the EU Referendum in 2016. The level of hate crime has reduced since the Referendum, though. We’ve not seen a sustained spike in the past two months, but on average it’s still higher than it was before the Referendum. Police forces will be carefully monitoring tensions and hate crime. More than ever, we want to assure the victims of hate crime that we’ll take their reports seriously and help them to gain the support they need. We will prosecute where evidence allows us to do so.”

Crimes committed against someone because of their disability, transgender-identity, race, religion or belief or sexual orientation are hate crimes and should be reported to the police. Hate crimes can include threatening behaviour, assault, robbery, damage to property, inciting others to commit hate crimes or harassment.

Commander Adrian Usher, who leads on MP security at the Metropolitan Police Service, concluded: “In recent weeks, police forces have contacted their local MPs to ensure they have appropriate, proportionate and effective security advice and security arrangements. This is important to us because our elected representatives must be able to express themselves and go about their business without facing abuse or harassment. We will take any reports or concerns from MPs, their families of staff extremely seriously.”