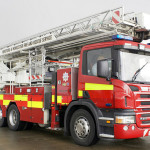 Under the plans, PCSOs will now undertake an intensive recruits training course commencing this month and which runs for five weeks. This is a first recruits course orchestrated jointly between the HWFRS and the SFRS which is designed to meet the same standards and requirements as all other new recruits course.

PCSOs will be employed on a retained firefighters contract providing cover when they’re available and not otherwise committed to police emergencies. Based on current demand, it’s estimated that a PCSO will attend less than one call per week. The average time taken on these calls is normally around an hour, so the actual time away from standard PCSO duties will be minimal, but could well mean the difference between a fire engine being available or not.

Commenting on the new plans, Area Commander Jon Pryce said: “Our on-call (retained) firefighter programme of recruitment is continuous. We constantly look to all members of our communities at all of our 27 locations in both Herefordshire and Worcestershire for potential on-call (retained) recruits who live within five minutes of their local fire station. We find it increasingly difficult to locate recruits who are able to provide cover during week day times and at weekends, while it’s also a growing challenge for employers in local communities to release their staff for on-call firefighting duties during normal working hours.”

Price added: “This joint initiative with WMP agreeing to release PCSOs for Fire and Rescue Service on-call duties in an emergency means that Herefordshire and Shropshire will now have more firefighters available at key times.”

He continued: “Wherever the public sector, and in particular the Emergency Services, can find ways of working closer together to share resources and staff, this can only be a good thing for members of the public.”

In conclusion, Price explained: “This initiative provides real value as there will be more widely-skilled and trained professional responders in our communities to deal with emergencies, whatever that emergency is and whenever the public needs us. I’m not sure it’s important who the person dealing with the crisis works for or what they do when they’re not answering an emergency, only that the public receives the highest quality and fastest response possible.”