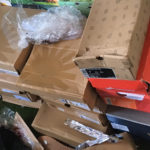 The Police Intellectual Property Crime Unit (PIPCU), which is run by the City of London Police, recently seized over 2,000 items – including clothing, shoes and handbags – in Manchester as part of its crackdown on counterfeit goods sellers on Facebook Marketplace.

PIPCU visited addresses in the Manchester area on 22 and 23 May and seized 2,118 items from just one residential address which are believed to have left 55 brands out of pocket. A 47 year-old woman who lived at the address has been interviewed and released under investigation. An additional 50 items were seized at a second address.

Officers targeted people who are believed to have sold counterfeit goods on Facebook Marketplace. Officers were making sellers aware of the risks that these products pose to the people who buy them and highlighting the fact that this is a criminal offence.

Fake make-up and perfumes can contain chemicals that cause swelling, rashes and burns, but the consequences of purchasing online don’t stop at receiving poor quality or dangerous fakes. PIPCU is warning the public about the consequences of providing personal details to people online who then use them to commit fraud such as registering counterfeit websites. The result is that online shoppers unwittingly become victims of identity theft. Officers are seeking to warn these people by offering advice and support about the signs to look out for before purchasing online.

PIPCU has suspended over 40,000 counterfeit websites since its launch in September 2013, but as social media capabilities develop, sites such as Facebook Marketplace are increasingly being used to sell counterfeit products. 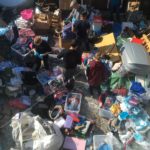 Detective Chief Inspector Teresa Russell, head of the City of London Police’s Intellectual Property Crime Unit, said: “This action should be a warning to those who may be using Facebook Marketplace or the Internet to sell counterfeit products. The risks of counterfeit goods are significant with impacts on the health, safety and well-being of the public. Our work in the Manchester area is part of our wider aim to crackdown on counterfeit sellers who operate across social media. The City of London Police’s PIPCU is determined to work with social media sites to prevent the buying and selling of what can be dangerous products. Unlike legitimate products, counterfeit goods are not subject to rigorous safety and compliance tests. This puts the consumer at risk.”

Dr Ros Lynch, director of copyright and enforcement at the Intellectual Property Office, added: “This is excellent work by PIPCU. It’s great to hear that counterfeit goods have been seized. I hope this is a warning to anyone selling counterfeit goods on social media sites that action can and will be taken. Protecting consumers against the dangers involved in counterfeit goods is essential. We echo the advice given by PIPCU on how to stay safe when shopping online and urge consumers who have been misled into buying counterfeit goods to report it to Action Fraud.”

A Facebook spokesperson commented: “Facebook takes Intellectual Property rights seriously, while the safety of people on Facebook is our Number One priority. For this reason, we have strict Commerce Policies in place with which sales on Marketplace must comply. We do not permit deceptive, false or misleading products on Marketplace, including counterfeit goods. We use a mix of technology and human review to enforce our Commerce Policies and we’ve built extensive systems across Facebook for people to report items or buyers and sellers who are not acting in good faith. When an item’s reported, Facebook will swiftly review and remove anything that violates our policies.”