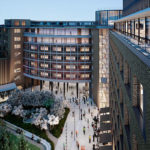 BBC Studioworks Ltd, the commercial arm of the BBC which runs the broadcaster’s former White City studio complex in London’s Shepherd’s Bush, has awarded Pilgrims Group the contract to provide a full range of security services at the site. Under the Terms and Conditions of the contract, which the company won in a tender process involving four other businesses, Pilgrims Group will provide security services including security guarding and the close protection of VIP guests and celebrities.

The recently redeveloped studio complex offers studio space to broadcasters and hosts high profile productions such as the latest series of The Jonathan Ross Show.

The new security agreement follows Pilgrims Group’s success in securing a five-year, six premises deal with ITV earlier this year and represents a significant expansion for the business in the broadcasting and media arena.

Other services to be provided by Pilgrims Group on this particular contract include CCTV monitoring, Front of House, reception duties, a full event security management team for all shows broadcast at the studios (currently up to three per day) and audience management and search roles (for events of up to 500 people).

“We were chosen because we were able to offer a complete bespoke security solution,” explained Pilgrims Group’s senior operations manager Anthony Wisdom. “The client liked the fact that we’re not just a security company, but also risk management specialists. They were impressed by our existing broadcast sector experience and our ability to produce the standard and emergency operating procedures for the site and the studios from scratch.”

David Freear, chief operating officer at Pilgrims Group, added: “We’re delighted to be working with BBC Studioworks Ltd and feel privileged that the business has placed its faith in us. This new contract consolidates our growth in the broadcasting and media industries as clients in these sectors begin to recognise how our multi-disciplined approach can enhance their operations.”