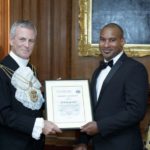 British Transport Police (BTP) officer PC Wayne Marques – who confronted three knife-wielding terrorists during the recent terror attacks in the London Bridge area of central London and, as a consequence, suffered severe life-changing injuries – is the chosen recipient of this year’s City of London Sheriffs’ Award for Bravery.

The City of London Sheriffs’ Award was introduced shortly after the 2007 London Underground and bus bombings specifically to recognise outstanding acts of bravery by individuals from across the UK. Every year since then, the Sheriffs have sought nominations for individuals who have, without thought for their own safety, acted to confront danger in both a selfless and inspirational manner.

PC Marques was selected for the ‘Principal Bravery Award’ by the Sheriffs of the City of London sitting at The Old Bailey in the wake of a rigorous review of all nominations. The accolade was presented on Monday 9 October at the Annual Dinner of The Worshipful Company of Security Professionals, which was held at the Merchant Taylors’ Hall in London.

At around 10.00 pm on the evening of Saturday 3 June, three terrorists drove a van into pedestrians on London Bridge and then engaged in a knife attack on innocent people enjoying the night-time economy in Borough Market. Eight individuals were killed and a further 48 injured. In addition to carrying knives, the attackers were later found to be wearing fake explosive vests.

BTP officer PC Marques – a probationary officer with less than two years’ police service at the BTP and a former Police Community Support Officer serving with the Metropolitan Police Service – was on duty in uniform at London Bridge Railway Station. He heard a woman screaming outside the station, went towards the screams and saw people running along Borough High Street.

PC Marques witnessed a man who was suffering from stab wounds being tended to by members of the public and then saw three attackers stabbing other members of the public with knives that were between eight and ten inches long. Equipped only with a standard issue expandable baton, and without thought for his own safety, PC Marques charged the attackers while they were stabbing yet another victim and began fighting for his life with all three.

As a result, PC Marques was stabbed in the head causing bleeding which impaired his vision. He received more stab wounds to his head, hands, hip and legs. PC Marques continued to confront the attackers until, as a result of his injuries, he lost consciousness. Shortly after this point, the attackers were shot by armed police officers. PC Marques was taken to hospital where he was then treated for his serious injuries.

PC Marques demonstrated a remarkable degree of bravery and an outstanding level of selflessness. The actions he took while seriously endangering his own life resulted in the terrorists being neutralised by armed police officers and, without doubt, prevented others from being injured or killed.

The City of London Sheriffs’ Award is launched annually in February with the ‘Principal Bravery Award’ being awarded by the Sheriffs in the autumn of the same year. As part of the 2017 award, PC Marques will receive a cheque for £2,500 and his name will be inscribed on an Honours Board and placed in a Book of Honour, both of which are on permanent display within the Central Criminal Court (The Old Bailey).

This annual award is open to nominations from the general public, the business community, the Emergency Services and the Armed Forces.

About The Worshipful Company of Security Professionals 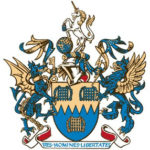 The Worshipful Company of Security Professionals is one of the 110 proud Livery Companies of the City of London. The Worshipful Company is both a membership and charitable organisation providing invaluable support to the wider education community and welfare services to the security sector.

Membership of The Worshipful Company is drawn from all security organisations within the UK and includes leading security professionals from the industrial and retail sectors, serving and retired members of the police service and the Armed Forces, security consultants, academics, heads of security for corporate businesses, investigators and the leading practitioners within electronic surveillance companies.

*For further information on The Worshipful Company of Security Professionals access http://www.wcosp.org