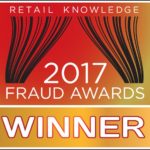 ORIS has won the coveted Vendor of the Year Award 2017 at the Fraud Awards, which ran as part of the Retail Risk Conference organised by Retail Knowledge (Media). The ceremony took place at The King Power Stadium, home of the Premier League’s Leicester City FC, on Thursday 5 October and was sponsored by WIS International.

The organisation which manages the not-for-profit ORIS Forums and ORIS Media, Wicklander-Zulawski Europe and the Loss Prevention Foundation qualifications in the UK as well as publishing Loss Prevention Magazine Europe secured the award against strong competition. The theme of ORIS’ submission was ‘greater connectivity’ in today’s digital world because, for the last 11 years, ORIS has been connecting loss prevention and risk professionals operating within the physical and online channels in the fight against fraud in both the ‘bricks’ and ‘clicks’ retail environments.

The 2017 Judges recognised that, going ‘above and beyond’, ORIS’ small team punches well above its weight in terms of proactively looking for ways in which to deliver value for its members.

ORIS began life facilitating discussion forums back in 2006, but has since grown enormously because of its unparalleled ability to bring people together in pursuit of reducing losses, whether that be through the sharing of Best Practice and intelligence or the education and Continuing Professional Development (CPD) of practitioners who buy into its offer.

Speaking after the ceremony, ORIS’ managing director Louise Kadege said: “This is a real honour for ORIS and recognition of the efforts of our small team. It’s not an understatement to say that the retailers and the police were previously estranged from each other, but since the inception of ORIS, there’s now a mutual respect and pragmatic working relationship between forum members and the 43 police forces, not to mention the creation of a greater understanding of issues faced by the numerous Police and Crime Commissioners, Business Crime Partnerships, town centre management bodies and BIDS, all of whom have had dealings with ORIS in a spirit of mutual respect.”

Kadege continued: “The connectivity runs deeper than just the work of the forums. Over the last decade, ORIS has added other areas to its portfolio including the Wicklander-Zulawski non-confrontational interview technique, Loss Prevention Magazine Europe, the successful spin-off of the US Loss Prevention Magazine, and also Loss Prevention Foundation qualifications. All have made a great impact in the UK as part of ORIS’ strategy of progressing the professionalisation of the loss prevention and risk community which, for too long, has been unfairly viewed by many retailers as a cost to their businesses rather than an added value service.”