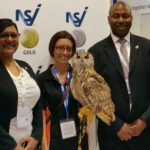 The National Security Inspectorate’s (NSI) stand located within Installer World at IFSEC International was a busy place to be last week, with the organisation welcoming a record number of service providers to London’s ExCeL, all of whom were keen to discuss their certification requirements and meet with existing approved companies and specifiers.

Three NSI experts shared their industry knowledge by taking part in well-attended seminars. Tony Weeks, head of technical services, participated in a panel discussion on the current trends within the security industry. Auditor Clare Crump made a presentation alongside Surveillance Camera Commissioner Tony Porter QPM LLB on the Surveillance Camera Code of Practice and what constitutes good operational practice, while Chris Hayes (the NSI’s operations manager) provided valuable guidance on how to choose a competent fire risk assessor. 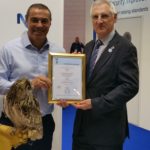 The Engineers of Tomorrow competition (another key feature of IFSEC International and of which the NSI has been a stakeholder since it began nearly 20 years ago) was once again a great spectacle for visitors, showcasing the skills and talents of apprentices and young engineers. NSI auditors Gary Hurst and Bill Baillie provided adjudicator support to oversee the competitors, who worked in pairs while pitting their skills against the clock.

The NSI’s CEO Richard Jenkins presented the heat winners’ prizes at the end of the first day, with this year’s heat winners being Corrie Stewart and Martin Hannaway (both of whom study at New College, Lanarkshire).

In addition, the NSI was also delighted to formally launch the Women in Security Awards at a VIP drinks reception. As official host of this year’s awards ceremony (which is set to take place on the evening of Thursday 14 September), Richard Jenkins announced that nominations for 2017 are now open. Una Riley, the awards’ founder, shared her original thinking in creating the scheme and outlined how the Women in Security Awards continue to play an important role within today’s security sector.

Industry representatives are now encouraged to nominate colleagues who have gone above and beyond the remit of their role in making a significant contribution to the industry.

“We were absolutely delighted by the level of interest in the NSI’s certification services at this year’s IFSEC International,” enthused Richard Jenkins. “It was an excellent opportunity to meet on a one-to-one basis with those companies who are looking to begin their journey in certification and also to spend quality time with specifiers and representatives from our approved companies.”