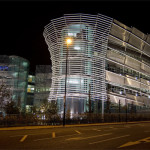 The University of Northumbria at Newcastle

The University of Northumbria at Newcastle has become the first higher education establishment in Europe to implement a “pioneering” distributed Command and Control solution specifically designed to improve the safety and security of students and staff.

John Anderson, head of security at Northumbria University, selected CriticalArc’s SafeZone app not only to enhance staff and student safety but also reduce operational costs through increasing the efficiency of everyday security operations across the university’s six campuses.

In practice, the highly intuitive SafeZone app makes it far easier for Northumbria’s 30,000 students and staff to summon security or safety assistance via a simple tap on their smart phone, in turn allowing security personnel to pinpoint the exact location of any incident.

The SafeZone app includes three main features: Emergency, First Aid and General Help. With a given individual’s exact location pinpointed via the app, security officers may then be dispatched quickly and accurately to Emergency and First Aid requests. For its part, the General Help button connects individuals directly to the Campus Services Help Desk.

Students and members of staff can also ‘Check In’ via the app and make the university’s security team fully aware of their location while they’re either working alone or outside of normal hours.

Situational awareness across the team

The cloud-based SafeZone system shares situational awareness across the whole security team, affording officers access to operational intelligence on the move and thus enabling more agile decision-making. As events unfold, via smart devices all team members have complete visibility of an incident and the locations of their colleagues. 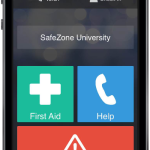 The Safe Zone app demonstrated on an iPhone

Superseding “slow, unreliable and costly” SMS solutions, SafeZone’s mass notification capability is fast and efficient, allowing Northumbria University’s security team to send alerts to all staff and students. Specific instructions may be forwarded to response teams or targeted messages can be sent to specific groups (such as local wardens).

Mass notifications may be accompanied by loud tones to warn users campus-wide or, alternatively, a discreet pulse to those perceived to be in the proximity of a threat scenario.

“We needed to consider what resources were available to us to support initiatives like 24/7 access,” commented John Anderson. “On investigating SafeZone, we were impressed with the app’s features and how it could adapt to meet the needs of both the university and the local community.”

Anderson continued: “Using this campus safety system demonstrates us taking pro-active steps to differentiate ourselves. It’s a prime demonstration of how highly the Health and Safety of our stakeholders resides on the university’s agenda. I’m 100% confident that the resources we now have in place, both technological and human, show our commitment to staff and student safety. Northumbria University is most certainly a safe place in which to work and study.”

Darren Chalmers-Stevens, EMEA director at CriticalArc, told Risk UK: “The University of Northumbria at Newcastle’s decision to implement SafeZone demonstrates its full commitment to ensuring a safe learning environment for students and staff. From our point of view, this project is very much a strategic win for CriticalArc with more to follow as we continue to educate the market and work with security managers and specialists at universities across Europe, the Middle East and Africa.”