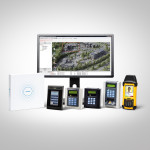 The new Silesian Museum houses 109,000 items from different fields of art, as well as archaeological, ethnographic and historical artefacts. The museum building, which opens in mid-2015, boasts an exhibition space that’s buried below ground with only glass tower skylight extensions visible above.

The AC2000 Galaxy interface enables inputs from intruder panels to be placed as icons on the AC2000 AED application, allowing for central monitoring of both access control and intruder alarms.