The Annual Report and Accounts for the National Crime Agency (NCA) sets out the significant successes the organisation has had in the fight against serious and organised crime during 2017-2018, including 2,037 children safeguarded, 136 potential victims of trafficking rescued, the seizure of 672 guns and 121 other firearms, £301.7 million of assets restrained and £44.4 million of assets frozen as well as 1,068 arrests in the UK.

Introducing the report, the NCA’s director general Lynne Owens stated: “Serious and organised crime is increasing in both volume and complexity and we must be relentless in our mission to protect the public and our communities from this threat to our national security. This Annual Report and Accounts sets out the significant successes we have had this year in leading the fight to cut serious and organised crime. I am continually proud of the achievements of the NCA and the determination of our officers.”

In the report’s Foreword, Home Secretary Sajid Javid said: “The director general rightly identifies a range of significant operational successes and achievements in her statement.” 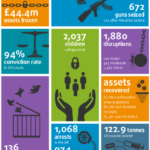 Highlights from the last year include the first convictions under Operation Stovewood on child sexual exploitation and abuse, as well as the first ‘hurt core’ conviction. The NCA has set the standard for tackling economic crime by becoming the first law enforcement agency to use Unexplained Wealth Orders, as well as leading the law enforcement response to major national ransomware attacks.

Javid continued: “As this report demonstrates, the NCA has rapidly developed a proven track record of responding robustly to changing circumstances and I’m confident it will continue to provide strong leadership in the fight against serious and organised crime in the year ahead.”

*A copy of the Annual Report for 2017-2018 can be accessed at http://nationalcrimeagency.gov.uk/publications/915-nca-annual-report-account-2017-18/file