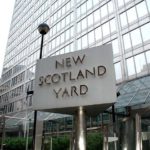 Assistant Commissioner Martin Hewitt, who’s responsible for territorial policing, said: “London is one of the safest global cities in the world. There are few others with such low rates of serious crime, such as murder and gun crime. Similar to the situation across the rest of England and Wales, though, crime rates in London are rising. That said, many of the crime types are still at a much lower level than five years ago and we need to set these figures against the backdrop of significant reductions in policing resources.”

There were 58 fewer homicides this year compared with ten years ago. Along with rises in traditional crimes, though, the Met is also facing new challenges across London.

“We’re concerned about the rises in gun and knife crime offences committed by young people and the changing nature of the offenders themselves,” urged Hewitt. “Young people are carrying knives for a variety of reasons including status, criminality and self-protection, but only around a quarter of them are affiliated with gangs.”

On this subject, Hewitt continued: “While we continue to focus on reducing stabbings by taking weapons and dangerous offenders off the streets, prevention and diversion from knife crime is key. There are complex social reasons why more young people are carrying knives. This situation cannot be solved by the police service alone. We must work with communities to help combat knife crime.”

According to Hewitt, the Met is also managing an increasing demand across specific areas as a result of societal changes around child protection, mental health and missing people.

“The crime picture has evolved and so must we in terms of the way in which we police, recruit and operate. We have an ambitious transformation programme which is already underway and will deliver a 21st Century police service for London, strengthening local policing by bringing specialist officers closer to communities.”

Hewitt outlined that the Met is fully committed to increasing the amount of neighbourhood officers dedicated to particular areas to engage with members of the public and work with them to keep them safe. By the end of this year, there will be an extra dedicated officer on every ward.

“The London Mayor’s Office for Policing and Crime has published the Police and Crime Plan, which sets out policing challenges and proposes key areas for London, with Boroughs and some wards able to set their own priorities. We’re also developing a complementary plan to ensure the objectives of the Police and Crime Plan are articulated in a clear set of actions for the Met. That will be finalised later this year.”

Hewitt went on to state: “We’ll be changing the way in which we investigate crimes, training more front line officers to carry out investigations of certain crimes and relieving some of the burden currently placed on detectives. We’re also rolling out body-worn video. This is already in use across 16 London Boroughs and will help secure stronger evidence leading to early convictions.”

The Met has also introduced the crime prevention campaign entitled ‘Be Safe’, which focuses on residential burglary, theft snatch and moped-enabled crime and is supported by operational activity. Its aim is to motivate, empower and mobilise Londoners to take small crime prevention steps towards protecting themselves and their property, while in parallel officers continue to work hard on disrupting and arresting the criminals.