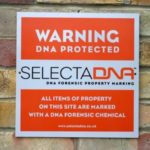 Merseyside Police is using the SelectaDNA intruder spray as part of a new operation designed to mark out burglars targeting shops across Merseyside in the run-up to Christmas. Police patrols will also be stepped up in shopping areas and security advice offered to members of staff in retail outlets as officers attempt to combat the annual pre-Christmas rise in shop raids. Other tactics include the use of trackers and fogging devices.

Operation Catania is a force-wide project set to crack down on offenders looking to make the most of the upcoming festive season. Specialist tactics include the installation of SelectaDNA security sprays at some premises. If an offender is branded by the spray it will be visible under ultraviolet light and make it easier for officers to identify offenders and, subsequently, secure convictions.

The spray is a fine mist containing a unique DNA code traceable to the individual shop. It can be triggered by the offender as they break into a given premises or may be activated in real-time by a staff member while a robbery is taking place. The spray remains resident for weeks on both skin and clothing.

Superintendent Jenny Sims of Merseyside Police explained: “Business robberies are not victimless crimes. Many of our convenience stores are run by local people who just want to earn a living and provide for their families. Criminals think nothing of pointing a gun or a weapon at them and screaming at them to open the till or safe. Some of these people are injured, while others will be left permanently traumatised by such an incident.”

The launch of Operation Catania follows a host of shop robberies and attempted robberies in recent weeks.

Nixon told Risk UK: “As a retailer living and working in Merseyside, I know that when a criminal steals from a store it can affect not just the members of staff there at the time, but the rest of the community, too. The impact, both emotionally and financially through insurance claims, can last for many months and years after the incident. I’m committed to making sure all of my stores have the best security measures in place so that would-be robbers realise as soon as they set foot inside a store that their chances of success are virtually non-existent. Any work conducted to prevent robberies from businesses on Merseyside can only be a good thing.”

In partnership with Search Dogs UK and due to increased demand to assist with police operations, forensic marking company Selectamark can now offer a second SelectaDNA search dog.

Joining Jazz, the world’s first detection dog to be trained to sniff out SelectaDNA forensic markers, is a three year-old black Labrador called Ronnie. Like Jazz, Ronnie has been trained by specialist dog trainer Mick Swindells of Search Dogs UK, who has had Ronnie since he was six months old.

Swindells explained to Risk UK: “I saw the potential in Ronnie to become a search dog from a young age and so I kept him for further training. In 2014, Ronnie took part in a successful research project to determine whether or not melanomas (skin cancer) have a unique scent. Ronnie was then trained as a human remains detection dog, which is something he still does.”

Earlier this year, Ronnie took part in a BBC documentary called ‘The Boy Who Disappeared’, which was all about a 16 year-old boy who went missing more than 20 years ago.

In August, Ronnie travelled to Russia with Swindells in an attempt to locate the body of Tsar Nicholas II’s younger brother Mikhail who was murdered by the Bolsheviks in 1918. Mikhail is still revered by the Russians as being the last Tsar of Russia.

In September, Swindells decided to dual train Ronnie as a SelectaDNA forensic marker detection dog to compliment Selectamark’s first dog Jazz. “Jazz is now six years old, and we wanted to be able to work the two dogs in tandem while we could.”

Humans can only search in 2D (ie in the line of sight), but dogs can search in 3D by using their noses. Jazz and Ronnie are able to touch marked items with their noses identifying the target scent of SelectaDNA, allowing officers to move in at this point and make further investigations.

Jazz has already worked with Merseyside Police on a special operation to catch criminals at the ports, and with Lancashire Police on Operation Tornado to catch metal thieves. She also worked alongside officers from Cheshire Police as part of Operation Shield, searching pawn shops for stolen items such as electrical goods and jewellery that had been marked with DNA.

Jazz was used as part of the Metropolitan Police Service’s Operation Ferrous, where she helped police search vehicles that had been stopped under suspicion of carrying metal or other stolen goods. Arrests were made during the operation and vehicles seized.

James Brown, managing director of Selectamark, added: “Using a trained dog like Jazz or Ronnie to sniff out property or criminals marked with SelectaDNA is the ultimate search tool for the police and any other investigators determined to catch  thieves and other criminals.”