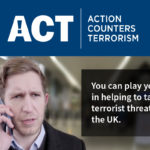 More than 3,000 individuals have contacted the police with information about possible terrorist activity since a campaign to encourage more calls from the public was launched back in March. The news comes as one of the UK’s most senior counter-terrorism officers, Deputy Assistant Commissioner Lucy D’Orsi, told an audience of security industry experts that their role in protecting the public is now more vital than ever.

Most of the concerns raised by the public as a result of the Action Counters Terrorism (or ACT) initiative turned out to be nothing that would give cause for any alarm. However, a crucial number of those contacts contained important pieces of information that resulted in further action from the police. This is information that might otherwise have been missed. A significant number of the calls were made following the Westminster terror attack.

“The increased response from the general public and from professionals whose job it is to keep people safe within crowded places has been really heartening,” explained D’Orsi, “but, as we’ve seen very recently here in London, we cannot afford to stand still. We need to exploit every possible way of keeping people safe and do all we can to make sure everyone remains vigilant.”

D’Orsi added: “We’re working very closely with security managers in busy shopping centres, at transport hubs and entertainment venues. Whether it’s in business communities or local communities, we need to encourage everyone to keep contributing because, sadly, terrorism is a growing and increasingly complex threat.”

The National Barrier Asset is a unique unit within world policing that, with the help of expert technicians, manages protective barriers that can be deployed by any of the England and Wales Home Office forces. Some of the National Barrier Asset equipment is placed around Parliament and is likely to have saved more people from Khalid Masood’s devastating drive along Westminster Bridge and around Parliament.

The ACT campaign was launched eight weeks ago. In addition to the 3,000 calls received, there have also been 300 referrals regarding online extremist material, while no less than 850,000 people have watched the ACT films.