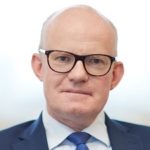 Max Hill QC has taken up the post of Director of Public Prosecutions for the Crown Prosecution Service (CPS). The Attorney General announced Hill’s appointment back in July. He replaces Alison Saunders whose tenure ended on Wednesday 31 October.

Hill said: “I’m honoured and excited to begin my term as the Director of Public Prosecutions. I’m grateful to Alison Saunders for her service and look forward to building on her legacy in the coming years. I am in no doubt this is a challenging time for the CPS. The crime landscape is changing, which is creating an increasingly complex caseload. At the same time, along with all of our partners in the criminal justice system, we must continue to make progress on the important work on how the disclosure of evidence is handled. I have seen first-hand the sterling work carried out by CPS staff and I’m determined to build public trust in our work.”

Hill brings a unique combination of legal expertise and public service at the highest levels to his new role. In March last year, he took up post as Independent Reviewer of Terrorism Legislation as well as being head of Red Lion Chambers and chairman of The Kalisher Trust.

He has a strong record of defending and prosecuting a number of complex cases involving homicide, violence, corporate crime and high-value fraud and has led some of the most significant and high-profile murder trials in recent years, including work on one of the Damilola Taylor murder trials and the 2005 London suicide bombings.

Hill led the South Eastern Circuit between 2014-2016 and was chairman of the Criminal Bar Association between 2011-2012. He has worked extensively in an advisory capacity both nationally and internationally.