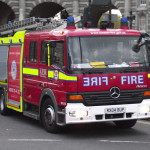 As the London Fire Brigade reflects on changes made to its service in the intervening decade, London Fire Commissioner Ron Dobson has stated that firefighters are now “better equipped than ever” to deal with another 7/7 attack in the capital.

The London Fire Brigade has made a number of improvements to radio communications, equipment, training with partner agencies and mobilisation, and has afforded firefighters “a greater amount of discretion” to act outside of standard procedures where this is both necessary and justifiable. All of these improvements help firefighters at any emergency and particularly so when faced with a large-scale incident such as that which occurred on 7 July 2005.

London Fire Commissioner Ron Dobson, who served as the Brigade’s Gold Commander on 7/7, explained: “As a Brigade, we will take time to remember the 52 lives that were lost, including a member of our staff, as well as the incredible acts of bravery by firefighters and other colleagues across the Emergency Services. I’m incredibly proud of our firefighters and Control Room staff who dealt with the traumatic incidents on 7 July 2005. They went above and beyond the call of duty.”

Dobson continued: “It wasn’t just the first responders who showed strength and courage that day. London as a city pulled together. Indeed, over the years plenty of stories have surfaced about members of the public helping the injured and distressed. I also want to take the time to reflect on how, as an organisation, we have changed in ten years. The Brigade prides itself on its resilience and its ability to adapt. We reviewed our response and procedures on the day and over time made changes to our equipment, training and policies. As a result, I feel proud to say that the Brigade is now more equipped and prepared than ever before to deal with a major incident in the capital.”

According to Dobson, the improvements made are testament to all of the staff members on duty that day and cements the London Fire Brigade’s reputation as “the best Fire and Rescue Service in the world.”

Inquest on the deaths of 52 people

On 6 May 2011, Lady Justice Hallett delivered her verdict and recommendations following the inquests into the deaths of 52 people killed on 7 July 2005. Although none of Lady Justice Hallett’s nine recommendations delivered as part of the Rule 43 report were specifically directed at the London Fire Brigade, the Brigade has subsequently worked with its partners in London to ensure that the public and firefighters are safer than ever.

The bombings on 7/7 highlighted issues of radio traffic between agencies and the ability to communicate from some of the deeper tunnels to officers on the ground. By February 2007, all firefighters had been given a personal hand-held radio with multiple radio channels and a dedicated channel for firefighters to share information and updates with each other throughout an incident.

The Brigade has also doubled the number of radios that can operate in potentially explosive atmospheres. Meantime, the analogue radio system previously fitted to fire engines has been replaced by a modern digital system which is compatible with radios across the blue light services. 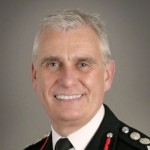 In 2013, a review of all the digital radio channels programmed means that all Fire and Rescue Services across the UK now have the same capabilities. It also means that the Brigade has a greater ability to talk with other agencies (such as the RNLI) that can be involved in emergency response on the River Thames.

Working with Transport for London as part of the latter’s Connect programme, the Brigade can now communicate across the London Underground network (including in tunnels between stations). Further improvements to the digital radio network within the London Underground allow for a greater number of simultaneous radio transmissions to take place.

Lady Justice Hallett’s inquest mentioned that there was some confusion and lack of clear communication at the incidents between the Emergency Services. Significant improvements to the way in which the Brigade works with colleagues in the Emergency Services and other agencies have been introduced and refined in recent years, increasing understanding and awareness of the roles, responsibilities, procedures and training of the various services involved. This includes the roll-out of a national Joint Emergency Services Interoperability Programme designed to ensure that all Emergency Services work effectively together when attending a major incident.

In 2000, London Fire Brigade introduced the role of inter-agency liaison officers (ILOs). These officers work with  the police, the ambulance service, the NHS and the military as tactical advisors to develop incident plans and response arrangements for scenarios involving terrorism, firearms, public disorder and natural disasters. The ILOs’ role has been so successful, in fact, that national inter-agency liaison officers (NILOs) are now found in every Fire and Rescue Service across the country.

For its part, the London Fire Brigade has increased the number of multi-agency training exercises since 2005 and this was particularly important, of course, during the London 2012 Olympic and Paralympic Games.

In April 2014, the Brigade hosted one of the largest and most comprehensive multi-agency exercises in its history. Over 220 Emergency Services personnel took take part, including specialist Urban Search and Rescue (USAR) teams from London and across the country, the Metropolitan Police Service and the London Ambulance Service. Two similar scale exercises are planned in the next 12 months.

The ability to make sure First Aid is administered as soon as possible to those in need was raised as a concern. Every fire engine in London is now equipped with a greater range of enhanced First Aid equipment, including defibrillators, while all firefighters are now trained to deliver a higher level of First Aid. This equipment is used when fire crews are the first Emergency Service on scene or where firefighters work alongside paramedics at incidents, notably so in those situations when victims cannot be easily reached. It will mean that casualties, particularly at the scene of a fire, can receive life-saving First Aid at the earliest opportunity. That being the case, the injured will have a better chance of survival.

The training was developed in partnership with the London Ambulance Service and includes oxygen administration, defibrillation, inserting airways and fitting cervical collars. 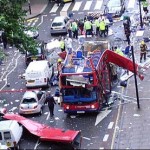 The Brigade’s Fire Rescue Units (FRUs) are crewed by staff specially trained and equipped to handle complex rescues, including rescues from road and rail accidents, water, mud and ice, urban search and rescue incidents (such as collapsed buildings) and chemical spills and for difficult rescues from height when specialist rope and line equipment is used to bring people safety to the ground.

A further six FRUs were introduced in 2007. The Brigade currently has 14 in its fleet.

A specialist team was created in November 2005 to improve the Brigade’s response to incidents where chemical, biological, radiological or nuclear (CBRN) materials are suspected or confirmed. The team has been specially trained to operate equipment which can detect, identify and monitor potentially harmful CBRN and other hazardous materials and supports fire crews at a range of incidents.

Back in July 2005, issues arose around locating exactly which London Underground stations fire crews ought to be sent to attend on the day of the attack. Since then, the introduction of the Unique Reference Number (URN) system by London Underground affords the Brigade’s staff mobilising crew from Brigade Control the exact location of an incident (including those occurring in tunnels). In turn, this enables the Brigade to send resources to the correct location where they are most needed.

In the final report, Lady Justice Hallett didn’t criticise firefighters or the Brigade for adhering to their policy and procedures but did raise the question as to whether they were able to exercise operational discretion within the exceptionally dynamic situation facing them.

The Brigade has devised an operational risk assessment process enabling those in command at an incident to make appropriate use of their professional judgement in circumstances where standard operating procedures might inhibit firefighters from achieving what’s required at the scene.

Firefighter safety is paramount, of course, so working outside of standard protocols requires a clear justification, a thorough risk assessment, control measures and a decision log.

Situations where the use of operational discretion may be appropriate include:

*Rescuing a saveable life in the circumstances where implementation of the full operational policy would lead to an unjustifiable delay, subsequently resulting in the potential for greater injury or lives being lost