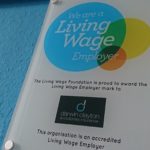 The Living Wage Foundation has announced that Darwin Clayton (UK) Ltd has received accreditation as a Living Wage employer. The Living Wage commitment will see everyone working at the company – which is one of the longest-established insurance brokers in the UK and a specialist in the fields of security and risk management insurance – receive a minimum hourly wage of £8.75 in the UK or £10.20 in London regardless of whether they’re direct employees or third party contracted staff. Both rates are significantly higher than the statutory minimum for over 25s of £7.50 per hour introduced in April last year.

Chapman continued: “We are a movement of over 3,700 UK employers who, together, want to go further than the Government minimum to make sure that all their staff earn enough to live on. We have lots of small businesses in the ranks as well as big household names. These businesses recognise that the Living Wage accreditation is the mark of a responsible employer and they, like Darwin Clayton (UK) Ltd, join us because they too believe that a hard day’s work deserves a fair day’s pay.”

As stated, the UK Living Wage is currently £8.75 per hour. The London Living Wage is presently set at a rate of £10.20 per hour. This figure covers all Boroughs in Greater London. These figures are calculated annually by the Resolution Foundation and overseen by the Living Wage Commission. They’re based on the best available evidence on living standards in London and the UK.