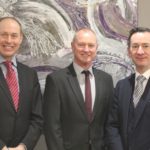 Kings Security has been selected to manage and host the intelligence database for SaferCash, the intelligence sharing initiative aimed at reducing the number of attacks on Cash-in-Transit couriers, banking establishments and ATMs.

This prestigious contract, effective as of this month, will see Kings take responsibility for the management of a highly sensitive and complex database on behalf of SaferCash, a unique nationwide security initiative which records and disseminates information on the activity of organised crime groups in order to facilitate the effective sharing of intelligence between couriers themselves, the wider Cash-in-Transit industry and police services nationwide.

Established back in 2005 and operated by the British Security Industry Association, SaferCash offers couriers intelligence on any offences where organised crime groups are active across force and regional boundaries. Pulling together all of this intelligence, SaferCash can help to facilitate early police intervention and, ultimately, give rise to a reduction in crime and losses. As the sole security initiative of its type, the cohort for SaferCash currently consists of 17 Cash-in-Transit companies, five major banks and building societies and the two largest ATM providers in the UK.

Rob King, head of strategic engagement at Kings Security, explained: “Winning the SaferCash business is significant for Kings and brings great kudos. It’s a well-respected and effective security mechanism for Cash-in-Transit operations as well as major financial institutions right across the UK. Kings Security will now use its considerable industry expertise, gleaned at least in part from the development of the Kings Intelligence System, to host SaferCash intelligence and incident management.”

King added: “The multi-faceted web-based portal has a broad range of functionality which allows users to collate, analyse and disseminate intelligence in quick time and boasts risk management and remote crime reporting ability.”

Steve Hurst, head of SaferCash, responded: “Kings Security has demonstrated that it’s a key player in the collation and use of intelligence to drive down crime. The business has a real synergy with SaferCash. This collaboration will enable SaferCash to build on an already excellent service with enhanced service delivery both to members and the police service. This will help to prevent and reduce criminality.”

*For more information about the SaferCash service and to view a full list of its current members visit: https://www.bsia.co.uk/sections/cash-and-valuables-in-transit/safercash.aspx