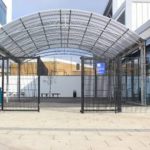 Jacksons Fencing, the perimeter security solutions specialist, has published architects’ views on school safety gathered as part of research for the business’ new report entitled ‘Protecting The Future’. Also encompassing teachers’ perspectives, the report highlights significant differences of opinion on the matter between architects and school management as well as some more reassuring elements of common ground.

On average, almost two-thirds (60%) of architects know of schools being affected by fencing and gate issues. While a similar amount of head teachers (63%) have commissioned new access solutions at least once and over three quarters (80%, in fact) have had their perimeter zone inspected within the past five years, these problems are clearly not being resolved.

The majority of architects (71%) find that school security refurbishments use the original specifications with some value engineering, while a significant number (17%) know of schools down-specifying to save cost. This is despite head teachers’ greatest concerns being centred on unauthorised exit and entrance (30% and 25% respectively), both of which can be prevented by dint of well-designed and specified fencing and gates.

84% 0f architects identify budget as the greatest challenge when installing school fencing, followed by restricted installation times (48%) and working where children are present (39%). The high number of schools keeping the same specifications may be a reflection of this concern for cost and minimum disruption.

A perimeter’s price tag isn’t the most significant concern for schools, though. At 73%, performance is the highest priority for teachers, followed closely by security ratings and accredited products (both at 68%). These come ahead of lifetime and initial costs (64% and 59% respectively).

Recent bomb threats sent to schools across the UK have reinforced the crucial role that school staff play in protecting pupils from harm. Head teachers identify the creation of a positive learning environment (86%) and keeping the school community safe (82%) as being the most important elements of their positions. Ensuring that security solutions meet industry standards is one way of fulfilling both aims.

One third of architects (31%) are seeing Secured by Design (SBD) and LPS 1175 standards increasingly specified. This is complemented by the fact that 95% of them are familiar with SBD. While change is on the horizon, there’s clearly work to be done here. Currently, under half of architects (47%) are cognisant of LPS 1175.

While head teachers are rightly concerned about the safety of their pupils, 39% don’t know where to go to find out more detail about school security and access control. They do, however, have some awareness of safety guidelines. Half of those surveyed are familiar with the recommended height for school fences, for example. A similar number know of the Royal Society for the Prevention of Accidents’ guidelines. The latter apply primarily to playgrounds. 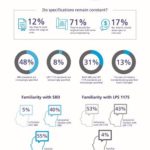 Overall, architects’ views on school security are in line with teachers, with 32% and 29% respectively saying that they acknowledge weak points in the perimeter. There’s also agreement between both parties about which safety issues are afflicting schools the most, namely multiple entrances, having ‘difficult to see’ areas and the requirement to look after and secure more than one building.

Architects, however, are more cognisant of these problems than teachers, with a 40% average difference between their responses. This disparity was especially marked where 72% of architects said that older fencing is an issue compared to 16% of those teachers surveyed.

Cris Francis, security consultant at Jacksons Fencing, informed Risk Xtra: “While there’s a healthy level of agreement between architects and teachers on what the key school security issues are, our research reveals some concerning differences. Despite schools prioritising the performance of their fencing and gates, architects are often up against stringent budgets that lead to maintaining outdated solutions or down-specifying.”

Francis added: “Schools need to find a way of balancing cost with adequately ensuring the safety of their pupils. Part of the problem might be that, without a professional understanding of design and security in-house, school staff cannot appreciate the impact of perimeter issues to the same extent as architects.”

Continuing this theme, Francis concluded: “Architects also have a greater awareness of safety standards and LPS 1175-certified products. By using their expertise to help schools choose the most appropriate solution for their specific risks and needs, they can assist in safeguarding staff and students alike from future harm.”

Back in April, 1,000 parents (nationally representative), 282 teachers (including 44 head teachers) and 75 architects, quantity surveyors and contractors were surveyed. The findings are incorporated into Jacksons Fencing’s study.