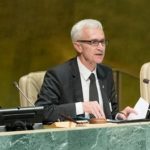 The multi-directional movement of foreign terrorist fighters (FTFs) means that law enforcement needs to reinforce its partnerships. That was the message imparted by Interpol’s Secretary General Jürgen Stock at a recent United Nations high-level Counter-Terrorism Conference.

Chairing the session on ‘Combating the Evolving Threat from Foreign Terrorist Fighters’, Stock said the volume of information on FTFs shared via Interpol over the past five years had increased significantly, with details of some 44,000 individuals now stored in the organisation’s databases.

Stock added that this information had already enabled law enforcement to make arrests around the world, in some cases within 24 hours of a source country sharing detailed information on a suspected FTF.

“As foreign terrorist fighters leave the conflict zones, they take with them the tactics and knowledge learned on the battlefield,” said Secretary General Stock. “However, these battlefields can also provide law enforcement with the information and evidence they need to identify and arrest fighters who may be travelling to other conflicts or returning home. Interpol pioneered military-to-law enforcement information exchange, but we must ensure that this data is accessible where it matters the most. Any gap can result in tragic consequences.”

Secretary General Stock also referred to the UN Security Council Ministerial Briefing back in May 2015, during which Interpol highlighted the risk of cross-pollination between conflict zones beyond Syria and Iraq.

Stock said the enhanced tactics, techniques and procedures being transferred to other regions underlined the importance of access to Interpol’s global network in support of counter-terrorism investigations around the world.

The session chaired by Secretary General Stock followed a side-event that ran under the heading ‘Countering the FTF Phenomenon: Combined Efforts of Police and Justice’ organised by the Permanent Missions of Iraq and Spain to the UN in partnership with Interpol, UNODC and the European Union.

Secretary General Stock also signed an agreement with Vladimir Voronkov (Under Secretary General of the UN Office of Counter-Terrorism) for enhanced co-operation between the two bodies in the areas of law enforcement and security issues related to preventing and countering terrorism.