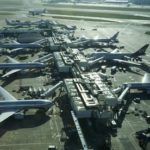 A £2 million competition orchestrated to help unearth new ways of safeguarding air passengers has been announced by the Government’s Future Aviation Security Solutions (FASS) team. The joint Home Office and Department for Transport team has launched a competition through the Centre for Defence Enterprise (CDE) as part of its wider FASS programme, which is worth a total of £25.5 million until 2021.

Suppliers are being asked to develop truly innovative technologies, with a focus on people security, baggage security and cargo security. The technologies and approaches should help detect the widest possible range of explosives, weapons and other threats that could be taken on board an aircraft, while at the same time limiting any inconvenience caused to passengers or delays around cargo operations.

Lord (Tariq) Ahmad, Minister for Aviation, said: “Keeping passengers safe is our absolute priority. The threat to aviation is continuing to evolve and we must remain both vigilant and a step ahead with our response. The recent UN Security Council resolution on aviation security, which was championed by the UK, has called on States to promote new technologies and innovative techniques. Through this competition, we’re investing in research to raise screening standards, as well as helping to create a safer and more secure transport system.”

This is one of the first competitions to benefit from additional support and resources as CDE transitions towards becoming the Defence and Security Accelerator.

Security minister Ben Wallace commented: “Air travel is already one of the safest and most secure ways to travel, but as threats change, our response must change with it. I would like to see entries to this competition which will make our skies even safer for passengers and, where it’s safe to do so, give them a smoother experience at the airport.”

The competition opened to proposals on Thursday 20 October and will run in two parts with £1 million in each phase. At the end of Phase 1, successful project managers will be asked to demonstrate proof of concept of their technology and explain their proposed approach to transition the concept towards a mature operational solution.

Bidders funded at Phase 1 qualify for entry into Phase 2 of this competition where up to an additional £1 million of funding will be made available.

*Proposals must be received by the CDE by 5.00 pm on Thursday 19 January 2017. Competition details are now available on the CDE website

In what is a major boost for the UK economy, the Government has announced its support for a new runway at Heathrow Airport – the first full length runway in the South East since WWII. The scheme will now be taken forward in the form of a draft national policy statement for consultation.

The Government’s decision on its preferred location, which will be consulted on in 2017, underlines its commitment to keeping the UK open for business now and into the future and as a hub for tourism and trade. The decision is a central part of the Government’s plan to “build a global Britain” and an economy that works for everyone.

A new runway at Heathrow will bring economic benefits to passengers and the wider economy worth up to £61 billion. Up to 77,000 additional local jobs are expected to be created over the next 14 years, while the airport has committed to create 5,000 new apprenticeships over the same period.

Expansion at the airport will better connect the UK to long haul destinations across the globe and to growing world markets including those in Asia and South America, in turn bringing a significant boost for trade.

Heathrow Airport already handles more freight by value than all other UK airports combined, accounting for 31% of the UK’s non-EU trade, and its planned expansion will create even more opportunities for UK business to send their goods to new markets.

While there are clear gains for business, passengers will also benefit from a greater choice of airlines, destinations and flight times.