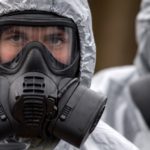 Accusations and recriminations between Britain and Russia are set to escalate with the recent news that scientists at the Porton Down military research facility have been unable to establish exactly where the nerve agent used to carry out the attack on former MI6 agent Sergei Skripal and his daughter Yulia in Salisbury was manufactured. Dan Kaszeta examines the episode and its political and security implications to date.

The recent Salisbury attack on the Skripals is, in many ways, part of a broad trend reaching back decades, but on the other hand, it could be viewed as a reckless act of terror due to its prevailing effects on people and property that were not the evident target. The revelation that the Salisbury episode was transacted not just by a nerve agent, but possibly by a particular nerve agent called a Novichok, is deemed particularly disturbing.

At the time of writing, it’s theorised that a nerve agent was applied to the handle on the door of Sergei Skripal’s car. Nerve agents are a specific family of chemicals. The term ‘nerve agent’ has strict definitions in military, scientific and medical literature. Nerve agents are a subset of the broader category that we could call “bad things affecting the nervous system”.

Accepted references define nerve agents as chemicals that interfere with the normal operations of the chemicals acetylcholine and acetylcholinesterase in the human nervous system. Some sources go as far as to restrict the definition to those chemicals present in the organophosphate family. However, there’s a strong case to be made that chemicals in the related carbamate family could be considered nerve agents because their biological action is similar. All are complex to manufacture and all are highly dangerous to human beings.

Many of the insecticides in the nerve agent category include the now banned Amiton, the highly restricted Parathion and several others.

Depending on the particular nerve agent and existing environmental conditions, they can last in the environment for widely varying lengths of time. On a warm day, Sarin may only last a few minutes, whereas VX or one of the pesticides could last for many months, and particularly so if soaked into material.

Nerve agents affect the human body by causing a chemical imbalance called a cholinergic crisis. They can be inhaled when you breathe, ingested in food or drink or absorbed through the skin and eyes. They usually operate quickly through respiratory and ocular exposure, with the onset of adverse effects occurring within a period of a few seconds to a few minutes depending on dose.

Absorption through the skin is slower (ie minutes to hours) depending on the dose. The rate of action for wound exposure is believed to be intermediate in speed between respiratory and dermal absorption. Gastrointestinal absorption isn’t well documented, but is likely to be fast. It has been theorised that nerve agents could be engineered to have a delayed onset of their effects.

The signs and symptoms, and their order of appearance, vary depending on the route of exposure. They’re drawn from the Textbook of Military Medicine volume on chemical warfare agents. In terms of liquid exposure to skin, the rate of action is from minutes to hours after exposure. Mild effects will be muscle twitching at the site of exposure (fasciculations), sweating, nausea, vomiting and weakness. Serious effects would be the mild symptoms plus difficulty in breathing, generalised muscle twitching, weakness, paralysis, convulsions and loss of bladder/bowel control.

Note that miosis (ie ‘pinpointing’ of the eye pupils) is often a late sign in situations where the victim is exposed only to liquid.

When it comes to the inhalation of aerosolised droplets or vapour, the rate of action is from seconds to minutes after exposure. Mild effects here will be the aforementioned miosis, dimness of vision, headache, runny nose, salivation and a feeling of tightness in the chest. Serious effects are, once again, the mild symptoms plus difficulty in breathing, generalised muscle twitching, weakness, paralysis, convulsions and loss of bladder/bowel control.

The phenomenon of ingested nerve agents is less well-studied, so the exact presentation of symptoms and the order in which they’re likely to appear is less certain. Logically, gastrointestinal effects may present themselves earlier. The rate of action of nerve agents could theoretically vary. Some compounds are more fat soluble than others, and this affects the rate of absorption through skin.

What are Novichok agents?

Novichok means ‘newcomer’ in Russian. The Novichok agents were developed by the Soviet Union in conditions of great secrecy back in the 1980s. For a full background, read the book ‘State Secrets’ authored by Vil Mirzayanov, a defector from Moscow’s chemical warfare research programme and creator of Novichoks.

The Novichoks were created for several reasons. First, they would avoid the (then current) state-of-the-art military chemical warfare detectors used in the West. Second, they could be made from precursor chemicals that were not proscribed or controlled under the arms control arrangements that were either in place or under negotiation at the time. It should be noted that, as Moscow was a party to the negotiations drawing up lists of specifically proscribed chemicals, it’s not surprising that the Novichoks didn’t make these lists.

Third, the agents were more toxic than any of the nerve agents already in existence, meaning that a smaller amount of agent could have the same wide area effects. Fourth, at least one of the Novichoks was a solid, so it could be deployed as a dust or a powder. This has bearings on weapon design, detection and decontamination. Indeed, a powder would be absorbed much more slowly in many instances, which could explain the timeline of the recent Salisbury case.

Finally, the Novichoks – according to some scientific literature, at least – have more potential for causing permanent damage to the nervous system.

The implications of the Salisbury attack are immensely important. There are four aspects of this attack that are clear to me.

First, nerve agents are, by their very definition, indiscriminate area weapons rather than precision weapons. The hazard spreads by contact. The perpetrators cared not one bit whether other people were killed or injured in the attack. It’s akin to burning down an apartment building to kill one individual.

Second, Novichoks contaminate things. This leads to extensive property damage of a type that will not be covered by insurance. It isn’t just an attack on health. Rather, it’s an area denial weapon. Third, the injuries produced by Novichoks may include permanent neurological damage. It could even be argued that, in this particular instance, death wasn’t even the sought after result. Permanent disfigurement is at least as intimidating as sudden death.

Fourth, as Novichoks are the Intellectual Property of the Russian State (having been invented there), if they were used in Salisbury this means the perpetrators didn’t care about attribution. In fact, clear attribution to Russia may be exactly the point of this attack. It’s a way of saying: “We did it and we don’t care that you know that we did it.” Putin’s Russia has had a long history of deliberately provoking crises in order to suit domestic political goals. Let’s not forget there was an election on.

An apocryphal maxim of covert operations is “admit nothing, deny everything, make counter-accusations.” It’s clear that the Russian State takes this expression to heart. If anyone doubted the existence of Russian ‘troll farms’ and other types of information warfare apparatus, the speed with which various conspiracy theories have circulated is evidence.

The full weight of the information operations establishment seems to be spreading ‘alternative narratives’ to try to explain away the attempted murders. At the time of writing, I count at least ten ‘theories’ that point fingers away from Russia. As is often the case, they’re generally mutually exclusive from each other, yet often the same outlets are pushing things that are exceedingly unlikely to be true and even contradictory of one another.

It takes an Orwellian degree of doublethink to believe simultaneously: “There’s no such thing as a Novichok” and “Someone used a Novichok as a ‘false flag’ attack”. However, social media is ablaze with this sort of thing.

For many commentators on the issue, the existence of such a defiant campaign of denial and obfuscation represents evidence in itself.