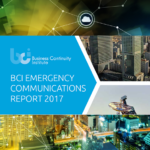 Preserving physical security and the safety of employees are the greatest concerns for business continuity and resilience professionals, and especially so when it comes to producing emergency communications plans. This is one of the key findings that has emerged from the latest Emergency Communications Report published by the Business Continuity Institute (BCI), which shows that one third (34%) of the countries visited by employees are considered to be ‘high risk’ for safety-related concerns.

Supported by Everbridge, the Emergency Communications Report does deliver the encouraging news that the use of emergency communications plans has risen from 84% to 86% in the past 12 months. Over a third of those without emergency communications plans stated that these processes are also not included in their business continuity plans. Worryingly, the lack of top management support this year is considered to be another significant issue, rising by 12% from 2016.

Further findings from the report include the following:

*Organisations are increasingly concerned about communicating with a mobile workforce 40% of those questioned reported having more than 100 members of staff who travel overseas. 34% consider the countries to which their staff travel to be high risk areas

*Business continuity professionals have a central role to play in managing emergency communications, but they need to collaborate with other resilience disciplines

Gianluca Riglietti CBCI, research and insights manager at the BCI and author of the new report, commented: “This year, the BCI’s Emergency Communications Report highlights how the issue of physical security is on the rise. The number of organisations adopting specific arrangements related to physical security is increasing, possibly due to events such as extreme weather episodes or terrorist attacks. It’s important that professionals from different disciplines work together to ensure that today’s organisations are made more resilient.”

Imad Mouline, CTO at Everbridge, added: “This year’s Emergency Communications Report gives practitioners actionable takeaways to improve critical event preparedness. The results show key improvements, but there remain gaps in planning which must continue to be addressed. Areas where gaps need to be addressed include the time being taken to execute plans, and also the lack of support from top management. It’s vital that organisations consider the findings and act appropriately to improve their comprehensive approach towards critical event management.”