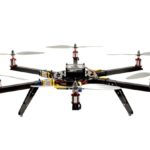 The Drone Zone enjoyed a hugely successful debut at IFSEC International 2016 and, as a result, UBM EMEA – organiser of IFSEC – has decided to team up with the UK Drone Show which is taking place in early December at Birmingham’s NEC.

The UK Drone Show will feature the “biggest, best and most innovative companies” in drone retail. These companies are set to bring the latest products to the event, as well as a host of experts who’ll be on standby to ensure attendees derive the very best possible return from their drone experience.

After attending the first show back in 2015, a spokesperson for i-Drone said: “The first UK Drone Show was amazing. To see so many people sharing the same interest and passion for this subject matter under one roof was fantastic.”

The Unmanned Aerial Vehicles market represents a hugely exciting opportunity for the security sector, with FBIC Research highlighting that the commercial value of the market is currently worth $700 million and projected to increase to $80 billion by 2025.

When the UK Drone Show delivers the new Drone Zone at IFSEC International next year, it will be hosting some of the best names in the business offering the latest camera products, demos and advice. Visitors will be able to witness the very best in 4K camera technology, both on the ground and in the air.

Innovation will also have a strong focus, duly affording attendees a look at some of the headline technology in 2017. The event will be examining some of the cutting-edge work being conducted in the drone and related sectors by high-tech start-ups, university researchers and entrepreneurs alike.

*For more information about IFSEC International 2017 and the UK Drone Show 2016 visit http://www.ifsec.events/international/the-drone-zone or watch this short video from last year’s show http://video.silverstream.tv/view/vheRXkGj