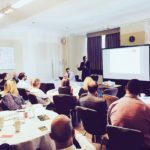 The City of London Police’s Insurance Fraud Enforcement Department (IFED) delivered the first in a series of regional engagement workshops in July, with at least three more being planned for the coming months. The IFED is running the workshops to give insurers an added opportunity to engage with officers on a variety of insurance fraud topics, including statement writing for referrals/evidence, internal fraud and the financial aspects of insurance fraud investigations.

As well as engaging with IFED officers, the workshops may also feature presentations from people who have spent time seconded to the unit.

In the most recent workshop – hosted in Leeds by Direct Line Group (DLG) and presented to attendees from multiple insurers – a DLG insurance fraud intelligence handler spoke about his six-month experience in the unit.

Attendees also heard from a barrister at the Citadel Chambers who was seconded to IFED for six months. He presented on insurance fraud in the criminal courts and took part in a Q&A session.

Colin Jemide, ‘Prevent’ advisor for the IFED and the man responsible for organising the engagement workshops, said: “Continued engagement with the insurance industry is a priority for the IFED. These workshops provide a good opportunity for us to engage with a wide spectrum of insurance staff across the country on several insurance-related topics. We want to meet face-to-face with staff from the insurance industry so that we can discuss pertinent issues and exchange ideas to improve our collaborative efforts in the fight against insurance fraudsters.”

Mike Brown, head of counter fraud intelligence at the Direct Line Group, added: “We were delighted to support and host the first IFED workshop. Attendance and feedback was extremely positive and highlights the importance of collaborative industry engagement in successfully tackling insurance related fraud. Insurance fraud is not a victimless crime. That being so, increased industry collaboration can only be a positive step in mitigating risk and ensuring that we protect our innocent customers.”

*Looking ahead, Swinton Insurance is hosting the next regional workshop in Manchester on 30 October. The full list of attendees from other insurers is yet to be confirmed. The IFED is encouraging any insurers or brokers in the Manchester or North West area to e-mail colin.jemide@cityoflondon.police.uk if they’re interested in attending

**The IFED is also asking insurers to contact the unit via the aforementioned e-mail address if they’re interested in hosting a workshop for their staff and, indeed, employees from other insurers in the surrounding area