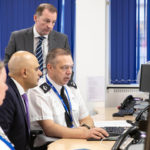 Home Secretary Sajid Javid has visited two policing hubs to see how the law enforcement world in the UK is preparing for the possibility of leaving the European Union without a deal. Javid was given a tour of the International Crime and Co-ordination Centre (ICCC), a unit recently established by the National Police Chiefs’ Council (NPCC). The ICCC will act as a centre of expertise to support police forces in using alternative co-operation mechanisms with European partners should a deal not be agreed before the UK leaves the EU.

“The UK’s main objective is to maintain existing levels of security co-operation and protect mutually beneficial capabilities, which is in the interests of both Britain and the EU,” said the Home Secretary. “It’s our duty as a responsible Government, however, to prepare for all scenarios. I’m reassured that our police, through the International Crime Co-ordination Centre and the National Police Co-ordination Centre, are well-prepared to respond to all scenarios.”

The Home Secretary also visited the aforementioned National Police Co-ordination Centre, where he was given an overview of its operations by chief constable Sara Thornton, chair of the NPCC.

Launched back in 2013, the National Police Co-ordination Centre co-ordinates the deployment of police officers and staff across UK policing during major events and operations. It oversaw the policing response to the visit of US President Donald Trump in July 2018. The President’s visit constituted the largest deployment of police officers since 2011. The visit was delivered safely and securely by police.

For the first time, police chiefs have asked the Police Remuneration Review Body (PRRB) – which makes recommendations on police officers pay in England and Wales – to consider a three-year pay deal rather than a one-year deal to give officers a bigger upfront pay increase.

The NPCC has published its annual submission to the PRRB for 2019-2020. As employers, police chiefs are required to make recommendations about officer pay increases and these are considered alongside recommendations from the Home Office, Police and Crime Commissioners and staff associations.

Officer views, operational pressures, inflation, recruitment and retention and trends in the employment market are all taken into account when police chiefs reach a decision.

The independent PRRB then assesses all of the evidence submitted and makes recommendations to the Home Office, which then makes the final decision.

The latest submission puts forward two options for the review body to consider: an increase of between 2% and 2.5% from September 2019 or a three-year pay deal worth over 6% with 4% payable from September 2019 in order to maximise the initial pay increase.

Police chiefs have also recommended on-call allowances for federated ranks (up to the rank of Chief Inspector) rise from £15 to £20 per day. Rises in subsequent years should be indexed to increases in base pay.

The NPCC’s lead for pay and conditions, Chief Constable Francis Habgood, said: “Police chiefs’ recommendations have to balance the desire to see officers fairly rewarded with the need to maintain services to the public within budget. These are always difficult decisions for chiefs and forces face different financial challenges. For the first time, we’ve asked the Police Remuneration Review Body to consider a three-year deal, which gives us the opportunity to give a bigger upfront pay increase this year. It would mean more cash earlier for officers.”

Habgood continued: “We’ve pushed the boundaries of affordability to gain the best deal possible for officers.  Without extra funding, any pay increase above this level would mean cuts elsewhere. Alternatively, if the independent body decides against a three-year pay deal, we’ve recommended a one-year increase of between 2% and 2.5% as the maximum all forces can afford. We’ve also recommended boosting on-call payments to front line officers.”