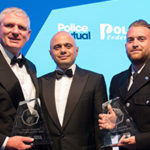 Hosted by the Police Federation of England and Wales, the 23rd Annual Police Bravery Awards saw PC Keith Palmer honoured posthumously by Home Secretary Sajid Javid. Javid, who was presenting the trophies, paid tribute to PC Palmer who was killed while defending Parliament during the 2017 Westminster terror attack.

The national award was presented to joint winners PC Palmer (posthumously) and PC Charlie Guenigault of the Metropolitan Police Service, who was stabbed multiple times after confronting three armed terrorists while off-duty during the London Bridge attack.

The Home Secretary said “we will never, ever forget” PC Palmer, who paid the ultimate sacrifice and gave up his life defending Parliament.

Hearing the screaming coming from Westminster Bridge, unarmed PC Palmer immediately ran towards the noise. He began closing the gates, intent on protecting those within Parliament, but as he was doing his job he was set upon by the terrorist and attacked with a knife. Tragically, PC Palmer died of his injuries. His brave actions gave armed police critical time to react, potentially saving countless lives.

He suffered serious injuries to his head, back and stomach, with his life hanging in the balance. During the course of the terrorist attack, Wayne Marques, a British Transport Police officer, also received significant injuries. Eight people were killed and 48 injured in the terror episode.

PC Shaun Cartwright of the Metropolitan Police Service accepted the award on behalf of PC Palmer.

The Home Secretary congratulated all of the nominees and winners at the awards. “We’ve seen this evening that you truly are the best police service in the world,” he said.

Calum Macleod, chair of the Police Federation of England and Wales, said: “These awards are a chance to showcase the exceptional bravery that officers protecting our country show day in, day out. The heroic deeds we have heard about did not happen by accident. They were borne of dedication, selflessness and an overwhelming commitment to keeping the public safe.

He continued: “Today, we commemorate true heroes. PC Keith Palmer paid the ultimate sacrifice for his bravery, but thanks to him many, many more deaths were prevented that day. For PC Charlie Guenigault, there was no such thing as ‘off-duty’. He ran towards a situation that most of us cannot even imagine, putting himself in grave danger and thinking only of helping others.”

There were 80 nominees from across 40 forces at the awards, which were sponsored by Police Mutual. Eight regional awards were presented in addition to the overall national award for PC Palmer and PC Guenigault.

Nick Hurd, Minister for Policing and the Fire Service, presented a regional award to Sergeant Mark Allmond and PC Alex Quigley of Thames Valley Police. The pair worked together to disarm and detain a man armed with a large carving knife who had already stabbed and killed a member of the public on a High Street in Oxfordshire.

Nominees and their partners were also invited to a special afternoon reception at Number 10 Downing Street earlier in the day, where Hurd celebrated their dedication to duty and thanked the families of police officers for supporting their loved ones.

“You can take great pride in what you do as a service and as individuals, knowing that it’s absolutely appreciated by the Government, but also by the public whom you all serve,” concluded Hurd.