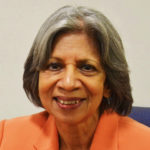 Millie Banerjee CBE: the new chairman of the College of Policing

Home Secretary Amber Rudd has appointed Millie Banerjee CBE as chairman of the College of Policing. Banerjee will now oversee the professional body for everyone in policing and work with the organisation’s newly-confirmed CEO, Mike Cunningham QPM, to professionalise policing and make sure officers and staff alike have the skills and knowledge they need to keep the country safe.

“I have spent many years in policing and it has been a privilege to witness the dedication and compassion of officers and staff to protect the public,” said Banerjee. “This is evident when I see that public approval for the police service has remained high despite officers and staff being faced with ever -more complex crime, a reduced workforce and greater demand.”

Banerjee continued: “At the College of Policing we’re dedicated to providing access to the best knowledge and skills which sit behind the bravery, dedication and compassion shown by the police on a daily basis. We have ambitious plans for times ahead and I intend on working with people across policing to continue building a professional body that supports all officers and staff.”

Home Secretary Amber Rudd responded: “Working with Millie over the last year, I’ve been impressed by the insight she brings from her time leading other public and commercial organisations, including the British Transport Police. I’m very pleased Millie is taking on the role permanently and, with Millie and Mike Cunningham in charge, the College of Policing will have a strong leadership team to help drive reform and ensure that the police service’s workforce is flexible, capable and professional, as well as being able to face the future with confidence.”

Rachel Tuffin, interim CEO at the College of Policing, stated: “Millie brings a wealth of experience from the private and public sectors, including several years in policing. On a personal note, I’m grateful for the support while I’ve been interim CEO, and look forward to her support and leadership benefiting the College in the future.”

Banerjee has enjoyed a long and varied career in the private and public sectors. She was chairman of the British Transport Police Authority for seven years and held several non-executive appointments, including as a non-executive director of the Cabinet Office, Channel 4, the Prisons Board, the Peabody Trust and Ofcom.

Banerjee is currently chairman of NHS Blood and Transplant in addition to serving as a Board member of the East London NHS Foundation Trust.