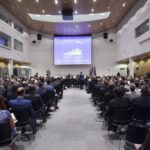 Co-hosted by Europol and the Slovakian Police in the context of the Slovakian Presidency of the Council of the EU, the event attracted high-level representatives from all 28 EU Member States, as well as Albania, Algeria, Australia, Bosnia and Herzegovina, Brazil, Canada, China, Colombia, Egypt, Georgia, Iceland, Israel, Jordan, Lebanon, Libya, Liechtenstein, Moldova, Montenegro, Morocco, Norway, Palestine, Serbia, Switzerland, the former Yugoslav Republic of Macedonia, Tunisia, Ukraine and the USA.

Representatives from Interpol, the World Customs Organisation and EU institutions and agencies also attended alongside representatives of the private sector and academia.

This year, the chiefs of police and senior representatives of national and international law enforcement authorities discussed topical issues pertaining to the security of the EU and beyond, such as the migration crisis and terrorism, as well as ways in which digital development impacts modern day policing.

Alongside the European Police Chiefs Convention, Europol held a meeting of the South East Europe Police Chiefs Association and hosted the launching conference of the Euromed Police IV, a project aimed at supporting the EU’s southern partner countries in countering the major threats posed by terrorism and organised crime.

The EU Member States’ directors of the customs administrations also met to take stock of the level of co-operation between Europol and customs and also discuss possible new avenues of co-operation.

Over 120 bilateral and multilateral meetings took place at the EPCC to allow chiefs of police to discuss operational matters and promote further co-operation.

Rob Wainwright, director of Europol, commented: “The turnout at this year’s EPCC shows how Europol has become firmly established as the home of the European law enforcement community, providing a unique platform for law enforcement partners to discuss  common issues of policing. Only through the exchange of Best Practice between police chiefs and the creation of a common vision for the security of our citizens will we be able to deal with today’s most pressing threats to security. Each year, Europol is proud to support the Member States in their endeavours by organising the European Police Chiefs Convention.”