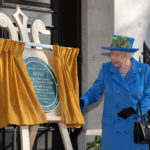 Her Majesty The Queen recently paid a visit to the original top secret home of GCHQ as part of the Centenary celebrations for the UK’s dedicated intelligence, security and cyber agency. The event took place at Watergate House, the 1919 birthplace of the organisation.

As part of GCHQ’s year-long celebrations, Her Majesty The Queen unveiled an historic plaque containing two secret, hidden messages – a nod to the code-breaking minds who established the agency 100 years ago and the ingenuity that still runs through the organisation today.

Her Majesty toured the premises with GCHQ’s director Jeremy Fleming. As well as viewing a series of historic artefacts spanning the organisation’s history, Her Majesty The Queen met the grandchildren of first GCHQ leader Alastair Denniston and two generations of code-breaking women – including Bletchley Park veteran Ruth Bourne – as well as the young winners of the 2018 CyberFirst Girls’ competition.

Fleming commented: “It’s an honour for Her Majesty The Queen to recognise this historic occasion as we celebrate 100 years of GCHQ helping to keep the country safe. Our history is full of amazing intelligence, world-leading innovation and, most of all, ingenious minds. It’s a history defined by a belief that, with the right mix of minds in place, anything is possible. As we enter our second century, and we continually race to remain ahead of our adversaries in the cyber age, it’s our brilliant work that still defines us today.”

GCHQ – or the Government Code & Cypher School as it was known at the time – was established on 1 November 1919 as a peacetime cryptoanalytic unit made up of staff from the Admiralty’s Room 40 and the War Office’s MI1(b). During World War II, GCHQ staff moved to Bletchley Park where they decrypted German messages, most famously by breaking Enigma-encrypted communications, in turn making a significant contribution to the Allied victory. 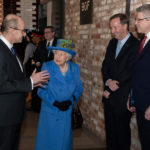 The heads of GCHQ, MI5 and MI6 pictured with Her Majesty The Queen at Watergate House © Crown Copyright 2019

The organisation now operates sites right across the country, including at Bude, Scarborough, Harrogate, Lincolnshire and in London, and is due to open a new facility in Manchester later this year.

Fleming added: “Our work isn’t glamorous or easily portrayed in film, but over the last 100 years it has saved countless lives, shortened wars, given Britain an edge and solved or otherwise harnessed some of the world’s hardest technology challenges. It’s clear to us all that the world is changing at an unprecedented rate. It’s now more interconnected than ever before. This is driving extraordinary opportunity, innovation and progress. It’s also unleashing amazing complexity, uncertainty and risk. To keep up in this digital era – and optimise the potential of technologies like Artificial Intelligence and Quantum computing – we know that we need to keep reinventing. This means making the most of the unique talent we have inside GCHQ. If we get this right, and I’m confident that we will, the prize is a new kind of security and intelligence mission fit for our second century.”

The wording on the plaque unveiled by Her Majesty The Queen at Watergate House reads: “1919-1921. The first home of GCHQ. The UK’s intelligence security and cyber agency. Known then as GC&CS, formed from the Admiralty’s Room 40 and the War Office’s MI1(b)”