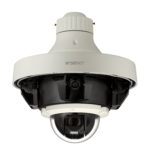 Hanwha Techwin has further strengthened its premium Wisenet P Series of surveillance cameras with the introduction of the ultra HD PNM-9320VQP model which, with four sensors and a separate integral PTZ camera, is designed to provide a highly cost-effective solution for detecting and tracking objects over wide open areas.

The option of exchangeable 2 MP and 5 MP lens modules enables the camera sensors built into the H.265 Wisenet PNM-9320VQP to work together to seamlessly capture 360 degree images of up to 20 MP resolution. In addition, the PNM-9320VQP’s 2 MP 32x PTZ camera element is automatically triggered to zoom in and track a moving object or move to a user-configured pre-set position whenever the motion detection function of the multi-directional camera detects activity.

“By placing a PTZ camera at the centre of the PNM-9320VQP, we’re able to provide a highly affordable and efficient solution for city and wide area surveillance applications such as car parks, Shopping Centres and warehouses,” said Uri Guterman, head of product and marketing for Hanwha Techwin Europe. “As well as their installation and maintenance costs being significantly lower, end users are able to avoid incurring the higher capital costs of using five separate cameras to cover an area and achieve the same level of functionality.”

The PTZ camera benefits from Wide Dynamic Range (WDR), which performs at up to 150 dB to accurately produce images in scenes that simultaneously contain very bright and very dark areas, as do the 2 MP lens modules. The 5 MP lens module options come with 120 dB WDR.

The IK10 vandal-resistant and IP66 weather-resistant PNM-9320VQP is equipped with a Gyro sensor which offers accurate stabilisation when a camera’s disturbed by wind or vibrations, resulting in more stable images. Additional features include five built-in SD card slots to help keep data safe in the event of network disruption, Defog (which makes corrections to blurry images captured in foggy conditions) and Lens Distortion Correction. The latter compensates for the image distortion that can occur with wide angle lenses.

The multi-streaming PNM-9320VQP supports H.264, H.265 and MJPEG compression. Bandwidth efficiency is improved by up to 99% compared to current H.264 technology when H.265 is used with WiseStream II, a complementary compression technology which dynamically controls encoding, balancing quality and compression according to movement in the image.

Hanwha Techwin has also just introduced the Wisenet PNM-9000VQ multi-directional camera. With exchangeable lens modules that, together, seamlessly capture 360 degree images of up to 20 MP resolution, this shares many of the PNM-9320VQP’s features, but doesn’t have a built-in PTZ camera.