Guy Mathias appointed chairman elect for 2019 by The Security Commonwealth 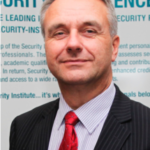 At the September meeting of The Security Commonwealth, Guy Mathias FSyI was confirmed as a vice-chairman and chairman elect of the organisation for 2019. The Security Commonwealth is an umbrella organisation of independent membership bodies across the security industry and provides a forum to consult and co-operate in the common interest and in the promotion of professionalism, good practice and information sharing with a view towards enhancing UK security.

Mathias will take over from Joe Connell in January, but as chairman elect he will start to work with the existing management team of Connell, immediate past chairman David Clark CPP PCI PSP, secretary Dave Cooke CPP, Graham Bassett and Mike Hurst CPP in order to ensure a smooth transition.

Mathias is a subject matter expert on extremism and a former recipient of the prestigious UK Security Manager of the Year Award for Services to Industry. He directed counter-extremist operations for Huntingdon Life Sciences during an unprecedented campaign of public order threat, violence and intimidation, whereby he was responsible for physical security, staff protection and pre-employment/contractor screening.

In addition, Mathias has lectured on the threat posed by extremism to the industrial, academic and Government sectors  and delivered numerous presentations to international industry and Government audiences.

Chair of the UK Pharmaceutical Industry Security Forum from 2009 to 2014, Mathias played a pivotal role in developing and maintaining close working relationships with the industrial, academic and Government sectors. He also served as corporate security advisor to GSK and was responsible for auditing the company’s global manufacturing facilities as well as writing a treatise entitled ‘Extremism: Past, Present, Future’.

Across the years, Mathias has conducted several risk and security reviews for organisations in the research and pharmaceutical sector. He’s a Fellow of The Security Institute and has recently finished a six-year elected service as its Validation Board chairman and strategy director. In tandem, Matthias is also a member of ASIS International’s UK Chapter and the Risk and Security Management Forum.

At present, Mathias is the risk and operations director at Suntory and chairman of the Food and Drink Security Association. He has recently been appointed as the Eastern Region chair for the Cross-Sector Safety and Security Communications (CSSC) initiative. The Security Commonwealth has recently agreed to support the CSSC financially and has requested that member organisations make a contribution to this important initiative.

Speaking about his appointment, Mathias told Risk Xtra: “I’m delighted to be taking on the chair’s role at The Security Commonwealth and seek to continue the significant work which has been conducted by my predecessors in positioning the organisation. Our aim is to continue to seek engagement with industry, Government and the public sector and to ensure a voice for all of the security organisations represented. I look forward to working with all of the constituent bodies who are affiliated.”

Current chair Joe Connell added: “I’m very pleased to welcome Guy to the Board as vice-chairman and chairman elect for 2019. We have been making steady progress in establishing The Security Commonwealth over recent years. Guy’s appointment marks an important milestone as I’m sure that, with a chairman and two vice-chairmen working in close partnership, The Security Commonwealth will continue to grow in stature and achieve its aims of improving communication, collaboration and influence within the security sector.”