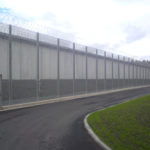 Binns Fencing believes the UK Government could make significant savings by adopting the company’s proposed new model for delivering perimeter security. The leading fencing contractor for the Ministry of Justice, Binns Fencing is this week unveiling its proposed model – as well as its Centre of Excellence for Prisons – at the UK Government’s global security event Security & Policing 2017, which runs from 7-9 March at Farnborough International Exhibition and Conference Centre.

The three-day event, first established over 30 years ago, is the premier platform for UK suppliers to showcase the very latest equipment, training and support available to police services, Government departments, organisations and agencies from both the UK and overseas.

Binns Fencing is proposing a new model of perimeter security and PIDS procurement and delivery, whereby it provides a single point of contact for the complete perimeter security package, in turn realising greater opportunities for innovation, reducing complexity and, indeed, the requirement for end users to manage multiple contractors.

The Hertfordshire-based company firmly believes such an arrangement could offer significant cost savings on PIDS cable installation and contract and project management costs.

For its part, the Government is yet to announce its latest prison build and refurbishment programme, but as the Security & Policing event runs, the first prisoners will be moved into HMP Berwyn, the new ‘super prison’ at Wrexham, which will eventually house up to 2,100 inmates and cost a cool £250 million to construct.

Binns Fencing’s managing director Adam Binns explained: “We’ve devised this model in consultation with the Government, main contractors and suppliers to deliver best value and a greater potential to innovate with a single point of contact throughout procurement, delivery and installation. The model will afford trusted advice on design, manufacturing and installation from exclusively British companies with British products encompassing CCTV, intruder detection, video management and access control through to physical security fencing, gates and hostile vehicle mitigation.”

Security & Policing provides a platform for professionals from the UK and across the world to engage with the very highest level of security expertise and the latest technology. The exhibition affords the level of industry engagement needed to enable the UK Government to procure and deliver on its national security priorities.

Security Minister Ben Wallace MP stated: “The first duty of Government is to protect its citizens. The environment facilitated at Security & Policing 2017 affords UK industry and security professionals a unique opportunity to gain access to the best in new technologies. In an ever-faster moving world, our security challenges can only be overcome by Government and law enforcement agencies embracing technical innovation.”