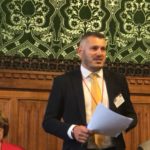 The Global Cyber Academy, the UK’s first dedicated Cyber Academy for business, has been formally opened at a launch event held in the Houses of Parliament. The Academy provides UK-accredited education programmes in cyber security. These formal business education programmes are delivered online, in class or via mixed (ie blended) learning. The subject areas of Blockchain and Artificial Intelligence will be available for study from January 2019. The course programmes are totally business environment-centric and deliberately feature thought-provoking Case Studies as well as reflective assessments.

Richard Bingley, the Global Cyber Academy’s founder and CEO, informed Risk Xtra: “For many years, there have been industrial-scale cyber attacks perpetrated against business communities around the world, including that within London. Every community in the world is a victim. The only way to reduce the threat and increase business resilience is to introduce business cyber education programmes on a large scale.”

Bingley continued: “The parallel for me is more than 130 years ago when Karl Benz built the first motor car. It took around 40 years for driving lessons and driving tests to be introduced following burgeoning and massive public safety issues. The Internet is on a similar time curve. It has been around a long time. It’s a great enabling technology, but so many people and businesses are now being harmed on a mass scale. When it comes to security, organisations are only as strong as the weakest links within. Therefore, we’re going to tackle this issue from the grassroots upwards and make this huge topic both accessible and fun.”

In addition, Bingley explained: “A group of us, made up of frustrated university tutors, police officers, public sector officials, business leaders, parents and grandparents all meet regularly. We were all jaded with the topic popularly known as ‘cyber security’. Endless conferences, endless endpoint security White Papers and endless, as well as seemingly self-perpetuating jargon. We all just said to each other: ‘This has to lead to pretty much everybody in the workplace being educated about cyber in a way that they both enjoy and understand’.”

An Advisory Council of experts – including university academics and tech sector specialists – and a diverse teaching team was formed during 2017-2018. Classroom-based instruction began in April this year. Classroom training has already occurred in Malaysia, the Oman and Bahrain, all of them key UK export markets.

Richard Bingley spent several years working in the sphere of IT training in the City of London before undertaking various communications and security management roles. He then ran the Business School at Buckinghamshire New University until last year. His PhD study falls within the scope of business community cyber resilience.

“We’re proud to come from the UK and we feel that the UK teaching approach – of impartiality, reflection and rigour – has a really promising nuance that will serve as our USP. In our view, existing IT security training programmes are far too technical, too bogged down with rote learning and lack the emphasis on human behaviour and realistic physical security management approaches that’s needed. For their part, existing physical security training programmes are far too rushed and non-technical. We feel that our approach closes the blind spots on both sides of the subject vehicle – ‘cyber’ and ‘security’.”

Emboldening that last point, Bingley stressed: “For example, it’s no longer viable for security managers or any other managers to say that they ‘don’t do technical’. Through fun and easy-to-understand exercises, our courses will enable employees to climb up the scaffolding of digital literacy and become much more employable. At the same time, their respective organisations will become more cyber resilient. It’s about the mass digital upskilling of employees such that members of staff have a structured approach and a baseline competency. These days, the issue isn’t so much about a lack of awareness. Rather, it’s more about poor personal cyber hygiene and unstructured, inconsistent business information security practices. This isn’t a localised British problem. It’s a major structural flaw that will begin to significantly damage parts or indeed all of our global economy unless it’s addressed.”

The launch event in Westminster included contributions from an experienced range of expert endorsers who spoke on a variety of security topics. Presenters on the day were Dame Louise Ellman DBE, the Labour MP for Liverpool Riverside (who hosted and chaired the proceedings), Chris Phillips (former head of the National Counter-Terrorism Security Office and managing director of IPPSO who spoke about the terrorism threat) and Graeme McGowan (former UK Government intelligence agency worker and now senior tutor at the Global Cyber Academy, who focused his attentions on human behaviour and cyber).

Also speaking were Carolyn Harrison (the Global Cyber Academy’s European Union GDPR ambassador who concentrated on business preparation for the EU’s General Data Protection Regulation) and Neil Sinclair (COO at the London Digital Security Centre, itself a joint venture between the Metropolitan Police Service and the City of London Police, and who spoke about the subject of digital security).

For his own presentation on the day, Richard Bingley examined the key subject of cyber resilience.