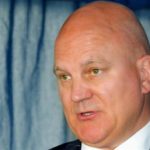 The Gangmasters and Labour Abuse Authority (GLAA) has announced the sudden death of its CEO Paul Broadbent. 54-year-old Broadbent – who had devoted more than 30 years of his life to public service in a career that began as a young police officer on the beat in Cumbria and which saw him rise through the ranks to attain the role of Assistant Chief Constable at Nottinghamshire Police – died at home in Barnsley on the evening of Wednesday 27 December.

Broadbent was a Chartered Security Professional and a Fellow of The Security Institute. He gained an MSc in Criminology and Risk Management from the University of Leicester in 1999 and served as a Visiting Professor at the University of Derby, concentrating on the subject of Modern Slavery studies. From 2012, Broadbent had also served as a Visiting Fellow at Nottingham Trent University.

Broadbent occupied the role of Assistant Chief Constable at Nottinghamshire Police with great distinction for a period of three years from 2010, moving to the GLAA to become its CEO in January 2013.

Speaking on behalf of the GLAA’s Executive Management Team, Ian Waterfield (director of operations) said: “It is with profound shock and deep sorrow that the GLAA announces the sudden death of its CEO Paul Broadbent. Paul’s legacy is the GLAA with its core principle of working in partnership to protect vulnerable and exploited people. Paul recognised the importance of building strong relationships to create an alliance with the capability of tackling head on the complexities of labour abuse and modern slavery. He was a champion for the vulnerable and the exploited. He recognised the real need for an organisation like the GLAA and it’s precisely because of his vision, determination and a liberal sprinkling of the charming Yorkshireman that he was that people of influence listened to him.”

Waterfield continued: “Paul was a warm, funny and generous man who cared deeply for his GLAA colleagues. He believed passionately that the scourge of modern slavery and labour exploitation can be defeated by partners and organisations working together. His death is a shattering tragedy for those of us who knew him. The world is now a far poorer place without Paul Broadbent.”

Headquartered in Nottingham, the GLAA works in partnership to protect vulnerable and exploited workers. The GLAA is a non-departmental public body governed by an independent Board. It was formed in 2005 in the wake of the Morecambe Bay cockle picking disaster when 23 Chinese workers drowned. The organisation regulates businesses who provide workers, making sure that they meet legal employment standards.

Margaret Beels, chair of the GLAA, added: “Myself and the other members of the GLAA Board were shocked and greatly saddened to hear of the untimely death of our CEO Paul Broadbent. We held him personally in the highest regard and immensely valued his leadership in transforming the GLA into the GLAA. Working together in 2018 and beyond, we will continue to strive to deliver the legacy that Paul has left with us.”

Victoria Atkins, Minister for Crime, Safeguarding and Vulnerability at the Home Office, stated: “I have been deeply saddened by the news of Paul’s death. He dedicated his life to public service in the police and, in recent years, in his leadership of the GLAA. He was passionate, innovative and determined in his efforts to tackle labour exploitation and modern slavery and to make a real difference to people’s lives. My thoughts are with his family, friends and colleagues at this very sad and difficult time.”

Nottinghamshire Police’s deputy chief constable Rachel Barber has also paid tribute to Broadbent. “Our thoughts are with Paul’s family at this difficult time,” explained Barber. “He was a well-respected, warm and funny man who will be deeply missed. During his time as assistant chief constable he made a great contribution to the force, and specifically in the development of the policing of major crime, serious and organised crime and the specialist technical capabilities of Nottinghamshire Police.”

On learning of Broadbent’s passing, the National Crime Agency tweeted: “Our thoughts and condolences are with the family and friends of Paul Broadbent. He made an outstanding contribution to the effort to tackle modern slavery and will be greatly missed.”

Ian Waterfield concluded: “Our thoughts, prayers and condolences are with Paul’s beloved wife Fiona, daughter Ava and his wider family and friends who have asked for privacy at this distressing time. There are dark days ahead for us all as we attempt to make sense of what has happened and come to terms with Paul’s passing. We know he was steadfast in his determination to see the GLAA flourish. The GLAA family has lost its figurehead. We’ve lost our leader. We will grieve for Paul and his family and then set about honouring his legacy by strengthening the GLAA, building on the solid foundations that he put in place and playing our part in helping to eradicate labour abuse and modern slavery.”

*Risk UK and each member of the team here at Pro-Activ Publications would like to offer our sincerest condolences to Paul’s family, friends and industry colleagues