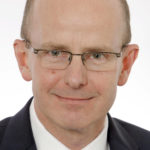 With the agreement of Prime Minister Theresa May, Foreign Secretary Boris Johnson has announced that Jeremy Fleming – who has served as deputy director general at MI5 since 2013 – is to succeed Robert Hannigan as director of GCHQ. Hannigan announced in January his decision to step down once a successor was in place. Fleming will assume his new role at Easter. The appointment was made following a recruitment process chaired by national security advisor Sir Mark Lyall Grant.

Announcing the appointment, Boris Johnson said: “Jeremy is a dedicated public servant whose work over two decades in the intelligence services has helped to keep our country safe. I congratulate Jeremy on his appointment as director of GCHQ at an important time for the service. I know that he will continue the excellent work of Robert Hannigan in leading this outstanding organisation. The skills and ingenuity of the UK’s intelligence community are critical to defending Britain from cyber attacks, terror plots and other activities that threaten both ourselves and our allies.”

Sir Mark Lyall Grant added: “Jeremy emerged from a strong and competitive field as the outstanding candidate to become the next director at GCHQ. He’s a national security professional of the highest standard who’s widely respected across the national security community, in the UK and overseas. I would like to thank Robert Hannigan for his excellent leadership of GCHQ over the last three years, including for the important role he played in preparations for the 2016 Investigatory Powers Act and in the setting up of the National Cyber Security Centre.”

Commenting on his new role, Jeremy Fleming observed: “It’s a great privilege to be asked to lead GCHQ. The organisation has a distinguished past and an increasingly important role to play in keeping Britain safe in the digital age. From managing cyber risks posed by nation states through to preventing terror attacks, keeping our children safe online and supporting our Armed Forces, the exceptional men and women of GCHQ operate on the new front line of global challenges.”

Fleming added: “I’d like to pay tribute to Robert Hannigan, who over the last few years has led GCHQ through the transformation of some of our most important national security capabilities. I look forward to building on his legacy and, in particular, the role he has played in increasing the transparency of GCHQ’s crucial work and in expanding its cyber mission through the work of the National Cyber Security Centre.”

Outgoing GCHQ director Robert Hannigan said: “I’m delighted that the Foreign Secretary has appointed Jeremy Fleming to be the new director. I’ve known Jeremy for many years now. He’s a good friend and colleague. He comes to the role with deep intelligence experience and expertise.”

From the private sector to Government

Fleming joined Government from the private sector back in 1993. He’s a career MI5 officer with significant professional experience of national security and intelligence work, including international and Northern Ireland counter-terrorism, counter-espionage, cyber and protective security.

Fleming joined the Board of MI5 in 2005 with responsibility for technology. He was seconded to the Home Office in 2007 to be the director of strategy for the (then) newly-formed Office for Counter-Terrorism and led on the revision of the Government’s CONTEST counter-terrorism strategy.

On returning to MI5, Fleming became the director for intelligence collection, overseeing a significant uplift in digital capabilities. He was promoted to assistant director general in 2011 and led MI5’s preparations for the London 2012 Olympic and Paralympic Games.

Fleming was appointed deputy director general of MI5 in April 2013, with responsibility for the agency’s core operational work. He has since played a lead role in shaping the organisation to disrupt the changing face of the threat posed by terrorist groups and hostile state actors.