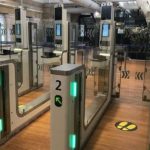 The British Ambassador to France, Lord Llewellyn, and the director general of Border Force, Sir Charles Montgomery, have opened the UK’s first overseas ePassport gates. In a ceremony held at the UK’s border control at Paris Gare du Nord Station, the Ambassador hailed the positive changes the gates would bring to passengers.

ePassport gates use the latest technology to check passengers at the border before continuing their journey. These gates will increase the number of passport control points and allow checks to take place efficiently.

Opening the gates, Lord Llewellyn stated: “Millions of passengers travel each year on Eurostar services with both countries benefiting from our close trade and tourism links. I’m delighted that passengers can now benefit from this new technology which will improve their experiences, allowing them to clear our border checks efficiently while maintaining security. Our investment in ePassport gates demonstrates a continued commitment to joint border security and providing increased capacity to meet the expected business and tourism passenger growth between France and the UK.”

Sir Charles Montgomery added: “As a world leader in the use of facial recognition, Border Force processes more people using this advanced technology than any other country in the world, helping to secure the border, keep communities and passengers safe and provide legitimate travellers with a first class service. Earlier this year, we welcomed the 100 millionth ePassport gate user to the UK, and I’m very pleased to extend the benefits of this technology to passengers travelling from Gare du Nord. We’re committed to ensuring Border Force has the latest technology available. We’ve spent £67 million in the last year alone and will continue this investment in the future.”

Eurostar’s chief operating officer, Philippe Mouly, commented: “We’re very pleased to be introducing the latest ePassport gate technology at Gare du Nord, Paris. This is an important part of a major programme of investment in our stations. Given our new high-capacity e320 trains and an increasing demand for our service, ePassport gates are key to ensuring that our passengers enjoy a swift and efficient check-in experience.”

There are almost 200 ePassport gates in operation at airports throughout the UK, offering passengers both an efficient and secure service at the border. They’re open to passengers with electronic passports from France, the UK and the rest of the EU as well as business and leisure travellers from eligible countries around the world who are members of the Registered Traveller service.

These are the first gates to open overseas with more planned to enter into service at the UK’s juxtaposed border control at Brussels Midi Station later this year. The introduction of these gates increases the number of passport control points at the Gare du Nord by five, in turn enhancing Border Force’s capacity to deal with Eurostar’s fleet of higher capacity trains.

Since their introduction, 100 million passengers have used ePassport gates at airports around the country. The first ePassport gate went live at Manchester Airport back in 2008. The gates use advanced facial recognition technology to compare the passengers’ face to the digital image recorded in their passport. Their details are also automatically checked against a range of immigration and security ‘watch lists’. Only when these checks have been carried out will the gates open and allow the passenger through the border.

ePassport gates can be used by UK, EU or EEA citizens (age restrictions do apply) as well as Registered Travellers with a biometric symbol on the cover of their passport. By the end of 2017, there will be 239 ePassport gates in operation.