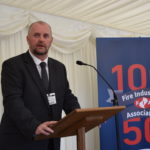 The Fire Industry Association (FIA) celebrated a double anniversary on Tuesday 12 April with a special honorary event held at the Houses of Parliament. The prestigious gathering of industry professionals and representatives of the media was hosted by Sir David Amess, the Conservative MP and chairman of the All-Party Parliamentary Fire Safety and Rescue Group, who opened the proceedings which were specifically designed to celebrate the FIA’s rich history over the last 100 years and also outline the findings of recent and detailed research into the causes of false fire alarms.

In his own delivery, Ian Moore (CEO of the FIA) spoke of the “planets aligning” due to the double anniversary of the FIA’s ancestor companies over the last 100 years. It’s now 100 years since the beginning of the Fire Extinguishing Trades Association (FETA), and 50 years since the British Fire Protection Systems Association (BFPSA) came into being. Moore noted that this is in line with the 350th Anniversary of the Great Fire of London, an event which he commemorated during his excellent and detailed speech.

“The FIA is growing at a fast pace,” stated Moore. “Now, we’re just short of 700 member companies. In recent times, we’ve added the FIRESA and Risk Assessment Councils and worked extremely hard on standards development. The FIA is all about raising the bar for professionalism.”

Moore explained that the FIA is presently putting together an Innovation Centre. “We’re making sure that 5% of our turnover is put towards innovation and special projects,” stated Moore. “There are many challenges ahead for the Fire and Rescue Services, and we want to make absolutely certain that technology is in a position to support any developments every step of the way.” 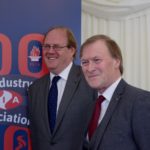 Martin Harvey, the FIA’s chairman, also spoke at the event which took place within the Terrace Pavilion at the House of Commons and was supported by the Fire Sector Federation. Harvey’s remit was to talk about the research findings of a recent study into the true cost of false alarms engendered by automatic fire detection systems.

Traditionally, false fire alarms have been blamed on the industry, and there was a perceived need to challenge this assumption. The study was underpinned by BAFE, the Building Research Establishment (BRE), AXA Insurance and Glasgow City Council. 120 questions were drafted and the database for the survey set up by the BRE.

Subsequent to the study, no less than 35 recommendations have been made in terms of how to cut back false alarms. The study results show that, out of 6,000 false alarms, no less than 480 were caused by Alarm Receiving Centres. Also, a great many end users don’t always know how to deal with false fire alarms.

“Dealing effectively and efficiently with false alarms could save £135 million every year,” urged Harvey. “We’re now on a mission to collect even more and better data. There’s further training and education to be conducted among the end user community. We want to set up new regional projects and progress research in this area. If anyone has any ideas that they’d like to propose for action please do contact us.”

There’s also going to be a special event on 2 September designed to raise awareness of fire alarms within host companies. At 9.00 am on that date, all fire alarms in London will be set to initiate. 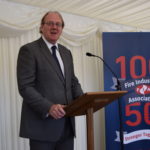 Formed from the merger of the FETA and the BFPSA back in 2007, the FIA has gone from strength to strength ever since. Indeed, the organisation is firmly recognised as the prime technical resource for the fire industry, providing a safe platform for industry stakeholders to join forces in resolving key issues and producing Best Practice guidance documents for those that need them the most.

The FIA’s event at Parliament was a huge success largely due to the patronage of the Association’s attending members and associates, all of whom continue to show great support for the organisation and its work.

The Association’s aim of promoting professional standards within the fire industry is one which is upheld by the continual work and dedication of the FIA’s Board and Council members, and is recognised nationally by the industry as the benchmark for Best Practice.