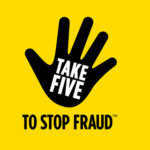 According to official figures just released by Financial Fraud Action UK (FFA UK), more than one million incidents of financial fraud occurred in the first six months of 2016. This represents a 53% increase compared to the same period last year, meaning that an incident occurred in the UK every 15 seconds between January and June.

The figures are released as FFA UK and all major banks and key financial services providers across the UK join forces in launching a national campaign designed to combat financial fraud. The campaign, entitled ‘Take Five‘, aims to put consumers and businesses back in control with straightforward advice specifically designed to help prevent financial fraud.

It focuses on financial frauds directly targeting customers, such as e-mail deception (known as phishing) and phone and text-based scams (sometimes referred to as vishing and smishing), and also reminds individuals that it pays to stop and think. The campaign will help in protecting people from criminals attempting to dupe them into moving money into bank accounts controlled by the fraudsters.

Commenting on the campaign, Katy Worobec (director of FFA UK) said: “Banks and other financial service providers work hard to protect their customers, all the while using highly sophisticated security systems. Last year, banks stopped £7 in £10 of attempted fraud from happening. However, as the banks’ systems become more advanced, so the fraudsters turn their attentions elsewhere and, sadly, this often means tricking people out of their personal details and money. Alongside the banks, people can also play an important part in helping us to stop financial fraud and protect themselves. We’re asking the public to ‘take five’. To take that moment to pause and think before they respond to any financial requests and share any of their personal or financial details.”

Backing the campaign, Home Office security minister Ben Wallace stated: “The impact of financial fraud can be devastating on victims, with fraudsters using increasingly cunning and convincing tactics. They prey on people who are trying to get on with their lives, but who, in a moment where they’re busy or distracted, become vulnerable. The message of the ‘Take Five’ campaign is to not be hurried or hustled. Take a moment before you give out any personal information. At the same time, the Government is working closely with law enforcement and the banking sector through the Joint Fraud Task Force to take action aimed at stopping the organised criminals behind financial fraud.”

To mark the launch of ‘Take Five’, new research reveals that almost three quarters (73%) of people claim they’re aware of the methods fraudsters use. Yet, at the same time, more than a quarter (26%) admit they still provide personal details to individuals claiming to be from their bank even if they don’t think they should.

Of those who have fallen victim to financial fraud, almost a quarter (24%) admitted the main reason was because the fraudster was extremely convincing. More than a third (37%) of respondents thought they were being scammed during a conversation, but still continued with the transaction in any case. Almost a quarter (23%) realised only after the conversation had concluded.

Tony Blake, senior fraud prevention officer with the Dedicated Card and Payment Crime Unit (DCPCU), commented: “Many people already know the dos and don’ts when it comes to sharing personal details, but it’s easy to forget if you feel flustered, pressurised or rushed into sharing information. ‘Take Five’ is about knowing it’s fine to stop a conversation or not respond to an e-mail so that you can take a moment to think and take back control of the situation. Everyone needs to be vigilant and safeguard their information. If you receive any calls, texts or e-mails out of the blue asking for your personal or financial details, always take a moment to stop and think about it.”

The Take Five campaign is asking consumers to help protect themselves from financial fraud by remembering some simple advice:

*Never disclose security details, such as your PIN or full password – it’s never right to reveal these details

Also backing the new campaign, Ian Dyson (Commissioner of the City of London Police) explained: “According to the British Crime Survey, fraud and cyber crime account for nearly half of all crime being perpetrated. This campaign is aimed at giving people the confidence to think before they act. Pausing for that short moment will go a long way towards thwarting the fraudsters who prey on peoples’ trusting nature. This campaign is one element of the Joint Fraud Task Force bringing together law enforcement, Government and business in a bid to tackle the increase in crime that blights every community across the country.”

With support from campaign partners Cifas, Action Fraud and the City of London Police, ‘Take Five’ is being delivered in collaboration with private and public sector supporters – including Government and the police – as well as FFA UK’s members: the major banks, credit, debit and charge card issuers and card payment acquirers.

The initiative is also supported by a range of consumer groups and other organisations including the Money Advice Service, National Trading Standards, Neighbourhood Watch and the independent charity Victim Support.

The Take Five brand will be visible across many of the banks’ resources including in branches, on ATMs and on their websites.

*Consumers and businesses can find out more by visiting the campaign website: www.takefive-stopfraud.org.uk

The Threat is Real