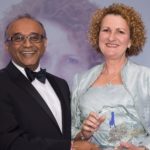 The awards come towards the end of a year which has seen a number of strides forward for the company, with increasing global business helping record growth rates and sales volumes, especially from the Government security sector in the USA but also from the police, security and corporate sectors in the UK, the Middle East and the Far East.

On the product development front, a recent Technical Workshop attended by a number of security leaders reviewed the latest version of Evidence Talks’ SPEKTOR forensic intelligence and witnessed the launch of its Cascade forensics derivative, which enables smart, automated digital triage through to imaging.

Commenting on these awards, Elizabeth Sheldon told Risk UK: “I’m delighted to have picked up these accolades.  Although they’re in my name, what they represent is the success of both the technology and the business model developed by the company. I’d like to take this opportunity to thank our customers for their confidence in us, which has contributed so much to the awards submissions we made. When heads of law enforcement, Government agencies, the military and large corporations place their faith in you on such important issues as people trafficking, cyber crime and cyber fraud, it really is an endorsement of the business as a whole.”

Evidence Talks is an independently-owned digital forensics business dedicated to helping the pursuit of justice. Founded in 1993, the company has built a team of security-cleared forensic analysts, trainers, digital artists and software developers who continue to create a suite of innovative forensic technologies, training and tools.